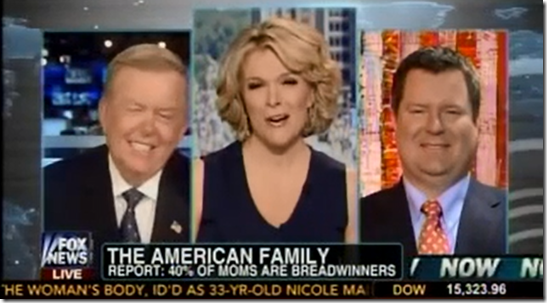 Fox News Megyn Kelly made every fair thinking person and every woman specifically very proud. She excoriated Lou Dobbs & Erick Erickson about their misogynistic rant while discussing a study that showed that more women than ever have become the sole breadwinners or primary breadwinners in the home. Erick Erickson even had the nerve to misrepresent science saying “When you look at biology, when you look at the natural world, the roles of a male and a female in society and in other animals, the male typically is the dominant role. The female, it’s not antithesis, or it’s not competing, it’s a complementary role.”

Megyn Kelly was not having any of it. She asked Erick, "What makes you dominant and me submissive and who died and made you scientist-in-chief?"  She also made it clear she was none too happy about his blog post on Red State in which he stated the following

Many feminist and emo lefties have their panties in a wad over my statements in the past 24 hours about families. I said, in a statement reflecting the view of three quarters of those surveyed in a Pew Research Center poll, that more women being the primary or sole breadwinners in families is harmful to raising children. This result came from a survey that found “nearly four in 10 families with children under the age of 18 are now headed by women who are the sole or primary breadwinners for their families.”  [source]

Megyn also asked him why his statements should be believed after she hit him with data from over 50 years of research and 69 studies that show that children whose mothers work do not have any more problems than those who do not. His answer was typical. He implied their studies were politically motivated. Lou Dobbs simply rambled so that Megyn simply balled him out and moved on.

Fox News for a change allowed science to be used against a thought process that permeates not only men and women in their network but in the codification of what it is to be in  the Republican Party today. Where was Megyn’s excoriation of Republican Senate candidates Todd Akin and Richard Murdock during their war on women? One is left wondering whether this dust up is simply to stop the further alienation of women cosmetically while still maintaining the support of a party that still sees women as subservient and pre-1920.