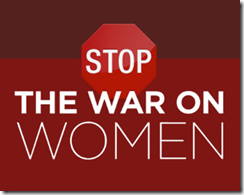 Men are just as smart as women.  Women in the real world have generally been the smarter sex. Inasmuch as it is still a male dominated society on paper, women allow most outcomes. One can assume it has much to do with biological urges that a patriarchal culture has ‘imposed’ on men. Many women describe it as the little head allowed to rule over the big head.

That begs the question, what makes a woman consistently vote for men that display a disdain for women, an ignorance of women, or simply a disregard for women? In a span of one week Governor Phil Bryant (R-MS), Senator Jeff Sessions  (R-AL), Senator Saxby Chambliss (R-GA), & Fox Commentator Erick Erickson with a  bewildering comfort were successfully able to corroborate why “The War On Women” phrase was appropriately descriptive of their wing of the Republican Party.

Governor Phil Bryant (R-MS): How did America  get so mediocre? “um you know I think parents became both parents started working and a mom  is in the workplace….”

Fox Commentator Erick Erickson: “Liberals telling Conservatives that they are anti-science but this is, Liberals who defend this and say its not a bad thing is very anti-science.When you look at biology, look at the natural world, the roles of a male and a female in society and other animals the male typically is the dominant role.”

What’s to blame for so many instances of sexual assault in the military?

Senator Jeff Sessions (R-AL): “.. points out that a picture here of a newsstand and a Air Force base exchange with you know sexually explicit magazines being sold. So we live in a culture that’s  awash in sexual activity.

Senator Saxby Chambliss (R-GA): “The young folks that are coming into most of your services are anywhere from seventeen to twenty two or three. Gee whiz. The level of, the hormone level created by nature um sets in place the possibility for these types of things to occur.”

One must not forget the litany of other candidates during the 2012 election cycle as well. Among them were Richard Murdock, & Todd Akin.

Better candidates will be elected as more women, fathers of women, brothers of women, uncles of women, grandfathers of women, children of women, & every permutation in between realize that the above backwards mindset is not slips of tongues, but true beliefs. These beliefs materially hurt women both economically and emotionally. These beliefs hurt the entire country. The electorate must educate themselves and accept responsibility to the body politic to ensure a working democracy.  The electorate gets the government they elect. The dysfunction is theirs. The day of reckoning may not be too far in the future.