Many lefties have been jumping onto the Snowden bandwagon without any thought that this is a setup using someone’s own vanity against them. Make no mistake, I  am a proud lefty Liberal as we are the ones responsible for an American middle  class and expanded access to equality for all (I include both Liberal  Republicans, Liberal Democrats, and Liberal others.) 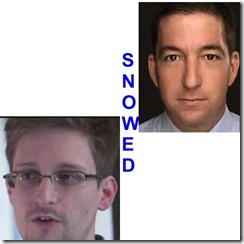 After seeing Snowden for the first time I was extremely doubtful of him, not that the surveillance program isn’t real, — hell, we knew  this since 2006 — but the messenger and the statements he was making were  problematic. I am a software developer and knew immediately part of his statement showed a severe lack of actual software knowledge.

Are our civil rights being violated? Absolutely. Is it the same as under Bush? Absolutely not since now two branches of the government effect the decisions with the third being informed.

The problem is we have a Plutocracy where government is responsive to the military and security industrial complex and not to the American people. Spying on our own people is for the profit of a few with the side benefit of crippling dissention.

It is the same modus operandi America has been willing to live with relative to the prison industrial complex. Criminalize a whole lot of stuff to keep the pipeline flowing as middle class tax dollars are transferred to those providing the prison, security, & military ‘services’.

America has not even been looking at the ball, the ball being the ‘civil rights’ violations. Support of Snowden’s actions by the left and the outcome of Snowden’s rather stupid actions will simply put many at ease since he is not the champion we need to reveal the corruption that is our security industrial complex. As of this writing what has been his path since leaving America? He has gone first to China (Hong Kong), then Russia, then where? He has hurt the movement severely.