There were over 5,000 men and women in attendance on a very hot business day at the Texas State Capitol to listen to State Senator Wendy Davis. The crowd was 10 times greater than what was expected. Women (and men) in Texas have finally reached the critical mass, the self-sustaining nature that will be required to change the Taliban nature of Texas politics. While the women of Texas have been organizing and mobilizing for some time to reclaim their dignity in a state that treats them like property or at best indentured servants, Wendy Davis has become the symbol, the encapsulation of said frustration. 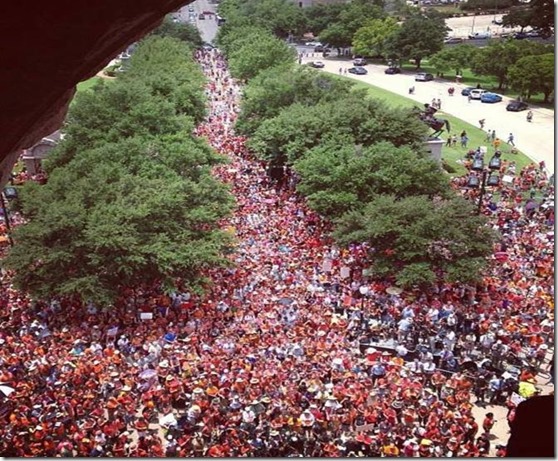 Wendy Davis gave a Texas centric speech to a Texas audience yearning for a promise land where once again Texas can be the state where freedom really reigns, the state of real opportunity for all and innovation. Through her, many women and men feel not only empowered but a responsibility to be the change. After-all, if a ‘tiny’ woman from humble beginnings can take on the task to defeat Goliath; it is the responsibility of every Texan to join the fight.

If one doubts the fear Wendy Davis and the new emboldened Progressives have placed in the power structure within Texas, one just need to take a look at the local coverage. National coverage was much greater than the few minutes it received on the local broadcast news and their respective websites. There is a change coming to Texas and it will be led by Texas women.