On Monday, two large groups converged on the Texas Capitol. Progressives that were protesting against the draconian anti women’s rights bill, Texas Senate Bill 1, were dressed in orange. The anti-choice contingent ultimately led by Arkansas ex-governor Mike Huckabee was dressed in blue.

There was a healthy supply of state police on the grounds. Most on the outside of the Capitol seem to be just scattered around the scattered crowds of the anti-choice contingent.

Pro-choice Progressives began amassing for a march that grew into an unending river of humanity. The march was flanked by the City of Austin police (and what seemed to be a couple of federal suburbans?).

At the march’s culmination the marchers engulfed the Capitol grounds peacefully. The anti-choice contingent was overwhelmed the sheer size of the marchers. Most of them left as the marchers continued their chants.

It was then that Texas became a police state. That was of course only the case for the Progressives in town. To be fair, it is not difficult to note that many of the officers, both from the City of Austin and those from the State of Texas were sympathetic to the Progressives roaming the Capitol and the Capitol grounds. As is the case throughout the entire nation, Progressives in government seem to have a fear of self-identity. Many Progressives were ‘roughed up’, mostly verbally, by a few officers, just to be treated apologetically later by others.

A few hours earlier the anti-choice folks occupied the same location in the picture below. There was no army of State cops blocking the Capitol then. That is effectively the intimidation of a select group. That is the method of a police state. 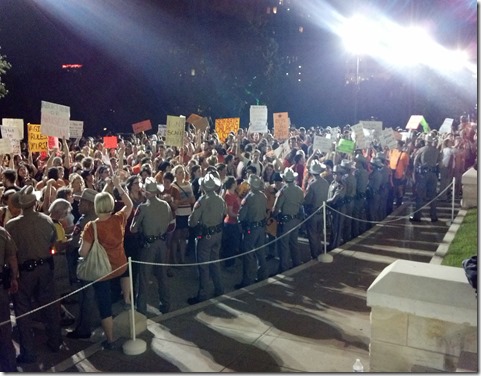 I was filming behind the police line for the entire sequence along with other media. I was wearing orange. My conservative blogger friend Bob Price was behind the line as well taking pictures. I was singled out and told to go into the crowd even though I identified myself as a blogger. Bob was never disturbed nor addressed.

After moving to another location, the same State cop came and threatened me with arrest with not very kind words using interestingly ethnic language (he was frustrated one can guess with the inroads Progressives are making). He was hoping for a reaction from me. As he insulted me I simply told him I would oblige immediately and join the crowd. My friend remained undisturbed on stage at the other side of the Capitol steps.

At least I was not physically removed and ‘roughed up’ like Sarah Slamen in the video below. She exercised her constitutional right to free speech to address her politicians and was removed by State cops. Is there any doubt about the attempt at Progressive intimidation?