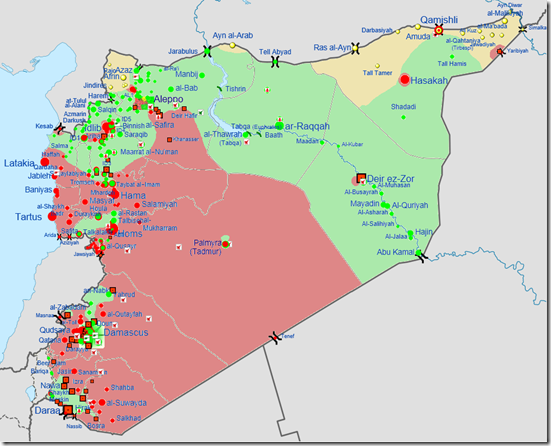 The premise for military action against Syria is that they violated an international norm, an international treaty, the Geneva Protocol & the Chemical Weapons Convention of which Syria is not signatory. Ironically this norm has been violated several times. It was violated by Iraq as well as by the Soviet Union in Afghanistan during the Reagan administration. No action was taken by the United States even though it was known to have occurred because it was not in the interest of the United States to take action.

Chris Hayes interviewed Secretary of State John Kerry. Kerry attempted to make the case for military action on several premises. One premise was that rogue states would view inaction as a green light for pursuing their misdeeds. The other premise was that the pain and suffering of the children made it unconscionable for the US to not intervene. The former is refuted by the status quo that occurred even after rogue states had used these weapons without retaliation. The latter is a bait and switch as many more people as well as children have died with conventional weapons.

It is indeed worrisome how similar the drumbeat to this ‘limited action’ is to the lead up to the Iraq war. While it is not as obscene as during the Bush years (e.g., you are either with us or against us, the outright lie about weapons of mass destruction), the outcome is likely the same as limited military actions always suffer from mission creep.

Retired Colonel Lawrence Wilkerson gave the best perspective on this on “All In With Chris Hayes”. He lays out the flaw in making this use of chemical weapons the real red line.

To intervene militarily in Syria because of a flawed treaty as implied by Wilkerson is something the John Kerry of 1971 would never advocate for. The Obama administration is asking authorization for a military strike that will kill a few more people because of the ‘few more’ people killed by chemical weapons, but will do nothing to stop the killing of thousands by means of conventional weapons used on both sides of the civil war.

There are only two winners if this action is taken. It is not Syria. It is not the Syrian rebels. It is definitely not America. The only winners are the military industrial complex and a corporatocracy dependent on cheap oil.

One can see the influence of the both as the same discredited characters that led the debacle of the last decade are being recycled, conservatives (e.g., Krystol, Rumsfeld, Senor) providing wisdom and backing for a President that was convinced to go to war by likely military industrial complex and corporatist insiders. They assume an uninformed America will either not know who they are or know that they were responsible for pilfering of America’s treasure and the deaths and maiming of thousands of our young soldiers.

Over the years it has always been easy to go to war on foreign soil by scaring Americans about the consequence of inaction. In the process billions were made by the war profiteers on the backs of the American taxpayer. It is time to make war on foreign soil difficult or impossible as war on what ails America at home is made easy, imperative, and profitable for the working middle class.