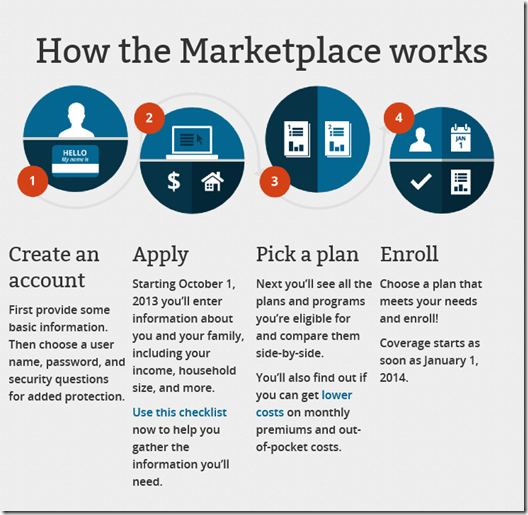 Deborah posted the following in the Kingwood Area Democrats group. She is a member of the age group that the Right Wing has convinced that the Affordable Care Act (Obamacare) is bad for them. Deborah has been fighting an uphill battle by writing op-eds in the local papers and speaking to whomever she could to enlighten them on Obamacare. She went to a financial planning seminar a few days ago and she recounts the following. 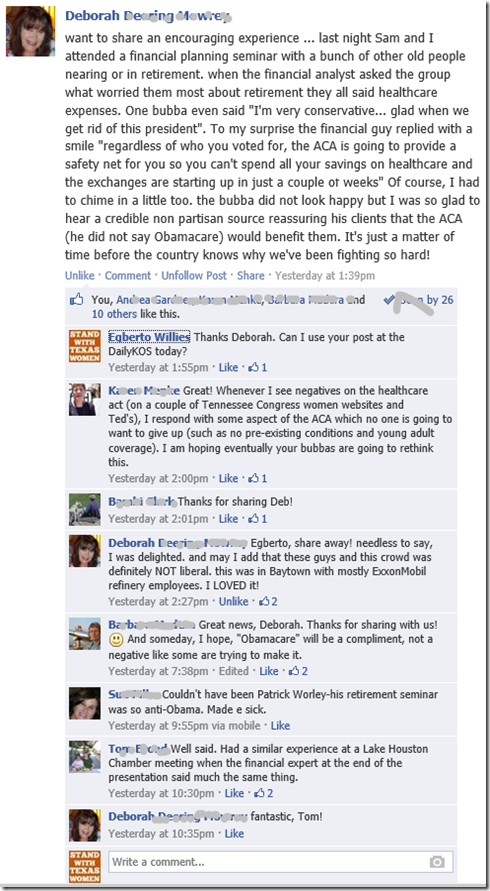 The financial planner told a group of older voting Conservatives that Obamacare was good for their financial well-being. Ironically, a commenter on the post in the same age bracket had the same experience with another group. Now that reality has set in, money managers are advising baby boomers appropriately.

On Monday the New York Times had an excellent article titled “In New Health Law, a Bridge to Medicare.” It details the benefits for those retiring before they qualify for Medicare and the benefits for Americans with pre-existing conditions that had to stay on their jobs lest they would be left without healthcare. The following paragraphs from the article are prescient.

THE sweeping federal health care law making its major public debut next month was meant for people like Juanita Stonebraker, 63, from Oakland, Md., who retired from her job in a hospital billing office a year and a half ago.

She was able to continue her health insurance coverage from the hospital for a time, but when she tried to find an individual policy on her own, none of the insurers she contacted would cover her because she was diabetic.

“I didn’t even get to tell them about the heart attack,” said Ms. Stonebraker, who has been without health insurance since July. She is a little over a year away from qualifying for Medicare, the federal insurance program for people 65 and older. She now worries a recent hospitalization will leave her several thousand dollars in debt.

Under the Affordable Care Act, or Obamacare, insurers must now offer coverage to people like Ms. Stonebraker, and they will not be able to set the premiums they charge on the basis of someone’s health. Starting Oct. 1, she and millions of other Americans are expected to be able to buy one of the plans available through newly created online state marketplaces, or exchanges, for coverage that begins in 2014. For those with low incomes, subsidies are available to help pay premiums.

At this point it is unnecessary to attempt to have any type of argument with Obamacare naysayers. This is the time for the enlightened to help relatives, neighbors, and friends to navigate their health insurance head winds. One should encourage them to discuss their medical situation and where applicable hold their hands to assist in getting the coverage they need. One should encourage them to get their information from healthcare.gov and not from political radicals maligning the law.

In a state like Texas where more than 25% of the population is uninsured, every fourth person you are in contact with is likely uninsured and a fall or accident away from a bankruptcy inducing medical bill. Many of the uninsured are unaware that Obamacare is the law of the land and are unaware of the benefits that will materially make their lives better.

Given that when Americans are provided with the individual benefits of Obamacare they love it, one should personalize the way it is explained with the specific benefits ones relative, neighbor, or friends’ need in such a manner that the benefits are stressed and not the politics. This will ultimately prevent that carnal resistance that can cause someone to make decisions against their own interest to save face.

Many part time workers will face employers like Trader Joe’s who may find it more economical to send those employees to state health insurance exchanges. While many corporations will blame Obamacare, over the years corporations have been offloading healthcare costs. One should explain that as more and more employees go to the exchanges the exchanges become more economical. Moreover not being tethered to the employer’s healthcare plan allows one to make decisions based on work satisfaction and not the requirement for healthcare.

Dissuade those opting for paying the penalty instead of premiums by reminding them that the new policies cover screenings at no additional charge. After-all, many of the uninsured have been without insurance for many years and in need of physicals and screenings.

As Obamacare becomes more and more real to Americans, they won’t necessarily claim to like it. However, they will not want to give it up for an alternative that does not exist. They won’t leave it for financial insecurity. Henceforth that is the biggest fear of the Republicans that oppose the bill. Americans will see Republicans as a liability to their well-being if they continue to disparage a law they come to see as beneficial.