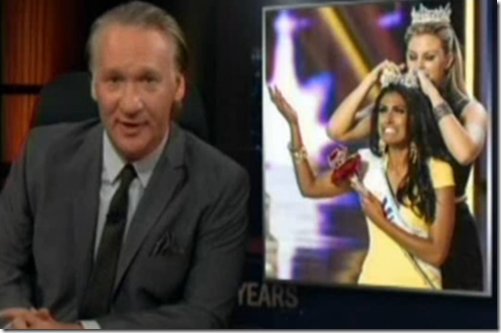 Bill Maher is onto something. Then again, this something most sociologists know. When people are hurting they either takes it out on their own communities or it manifests itself against some scapegoat.

Bill Maher had an interesting New Rules monologue today that while raunchy funny, deserves a more in depth analysis. He says,

This week we crowned a new Miss America, Nina Davuluri who happens to be the first of Indian decent and the Twitter sphere exploded with so much racist hatred you would have thought President Obama just made a reasonable remark. … My question is why, why, why has hate become the national pastime. Yes the technology has something to do with it. But to those who say ‘oh people were always horrible. We just have Twitter and Facebook now’, no, not like this.

The greatest generation had celebrities. … I think the problem is this. We just found out that the percentage of Americans who describe themselves as poor has doubled in the last five years; which is very significant because in the past the poor consistently and erroneously described  themselves as middle class. Because they had hope. Because they still  believed in that Ponzi scheme formally known as the American Dream. But now they are starting to get it; that the fix is in. And that the two Americas thing is kind of true. And they are in the wrong one.

Apple just released two new iPhones, an expensive gold one for the haves. And for the serfs a shitty plastic lime green one that looks like your phone is wearing crocks.

But here is the good news. Wages may not go up again. And good jobs may never come back. Andd you can now get an iPhone for ninety nine bucks.And you can use it to tell Betty White …..

Bill Maher seemed to have distilled one of the best monologues about the American Dream to date by the one and only George Carlin. The growth of hate towards our fellow Americans is growing with the decline in wealth and income of the middle class. Instead of being cognizant of those that are really causing this decline and fighting them, and lashing out against them, our closet peers, our anonymous peers, and those others take the brunt of our disgust and despair.

This is all by design. American citizens are played like violins. How are they played? They are kept entertained with cheap products and fed with high volumes of low quality foods. If the masses are entertained and their bellies are full, enough are willing to maintain the status quo. This skit by Salt Lake City Move to Amend is says it all.