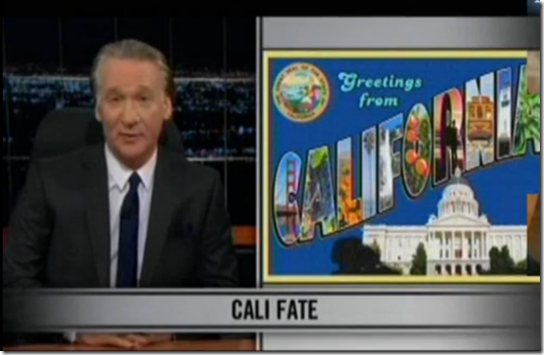 Bill Maher is getting back on all those that have been stumping on California’s past misfortune. In fact, a few months Texas governor Rick Perry went to California in an attempt to entice business to his “low tax” balanced budget state.

Maher notes that California has been a basket case, $27 billion in the red under Republican leadership. As Jerry Brown, a government loving Democrat came into power he did the fiscally responsible thing. He cut spending and raised taxes. Now California has a big budget surplus.

This is not surprising; Republicans have always loved cutting taxes on both the backs of the working middle class and at the expense of exploding budget deficits to appease their plutocratic masters. It was the modus operandi of papa Bush and son as well as the GOP Messiah Ronald Reagan.

The excerpts from Bill Maher’s new rule follow. He also wrote an amusing blog post on the same subject.

Bill Maher On Bending The Country Into California’s Image

While Right Wingers are taking over places like North Carolina, and Texas and even Wisconsin, California is creating the kind of modern, liberal nation the country as a whole can only dream about. …

It wasn't that long ago that pundits were calling California a failed state and saying it was ungovernable. But in 2010, when other states were busy electing whatever Tea Partier claimed to hate government the most, we elected a guy who actually liked it, Jerry Brown.

Without a Republican governor and without a legislature being cock-blocked by Republicans, a $27 billion deficit was turned into a surplus. How? Well it's amazing really. We did something economists call cutting spending AND raising taxes. … here in California, we're not just gluten-free and soy-free and peanut-free, we're Tea Party free! …

Texas could do it too. But they love freedom too much, like when that unregulated fertilizer plant blew up. … California isn't perfect, but it is in our nature from being on the new coast to be up for trying new things. For example now that it is clear Obamacare is going to be a success here, the movement to just go all the way to single payer is gathering steam. … In lots of areas, California has decided not to wait around for the caboose part of America. … It's so ironic -- the two things conservatives love the most, the free market and states rights -- are the two things that are going to bend this country into California's image.

It seems California and states that follow their Progressive tenets will have the last laugh. As states like Texas wallow with uninsured citizens from the lack of participation in the Medicaid expansion of Obamacare and from a poorly educated population caused by inordinately low taxes on corporations, they will make themselves the caboose of the country.