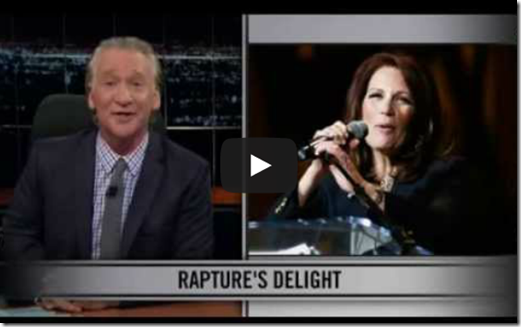 Bill Maher gave a rather funny but worrying portrayal of both Representative Michele Bachmann and Supreme Court Justice Antonin Scalia. Their out of the norm religious belief should concern us all.

Bill Maher had plenty of material to work with on “Real Time” Friday night, considering the fact that both Rep. Michele Bachmann and Justice Antonin Scalia publicly addressed their concerns about the end of days and the devil (respectively) in the same week.

At the end of his “New Rules” segment, Maher took aim at Bachmann’s recent comments that we’re living “in the End times,” by suggesting we consider that theory when it comes time for her to perform her Congressional duties. [Source]

While  Rep. Michele Bachmann beliefs that the end times are here, she is one of 435. Antonin Scalia is one of  nine that interprets laws for the entire country. His strange religious beliefs and statements put his judgment into question.

After reviewing Scalia’s theories on why the Devil doesn’t seem to be around anymore (because he isn’t possessing people, running pigs off cliffs or doing other things described in the Old Testament) Maher admits that it isn’t Scalia’s beliefs that bother him, but the whole “making decisions for the rest of us” thing.

“It’d be one thing if Mr. Scalia sold pizza for a living, but this is a man we go to to interpret our laws. It’s like smelling a gas leak and calling an exorcist.” [Source]

Check out the video below, it is funny but disturbing.