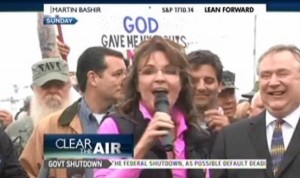 The trite hypocrisy and sheer evil of the actions of the Tea Party faction of the GOP is more dangerous than many believe. It will incite violence. This weekend it wrapped itself in the military veil. The world saw Sarah Palin and the GOP exploiting military veterans. They did so as they attempted to project blame for the shutdown on President Obama.

Suffice it to say Americans are not buying it. Americans love their veterans and understand that a shutdown hurts them both economically and emotionally. Exploiting military veterans will backfire as others take notice and it brings more scrutiny. Veterans have done a lot for their counties in the armed forces. With this being said, some veterans are not being rewarded the disability benefits they deserve. If you have found yourself in this situation and live in Tennessee, you may want to look into something like veterans disability lawyer Tennessee to help get all the benefits you deserve.

MSNBC Martin Bashir among many saw right through the charade.

Martin Bashir: We bring you an act of such brazing [sic] dishonest [sic] and speciousness that it’s hard to know where to begin.

Sarah Palin at Rally: Our vets have proven that they have not been timid. So we will not be timid in calling out any who would use our military, our vets as pawns in a political game.

Martin Bashir: Now, for most people, travelling three thousand five hundred miles from Alaska to the nation’s capital in order to grandstand at the Second World War Memorial, that your own political party has caused to close, would seem like a political game. … Keep in mind that it is the Republican Party that continues to shutdown the government, thereby curtailing veterans’ benefits. And it is the Republican Party whose sequester cuts have hammered the military. … The singular proof, that Sunday’s rally was solely about using the military as pawns in a political game.

Larry Klayman at Rally: We are now ruled quote unquote by a president who bows down to Allah. … and to demand that this president leave town, to get out, to put the Quran down, to get up off his knees, and to figuratively come out with his hands up.

Martin Bashir: This is the political game Mrs. Palin and her allies have been playing even before this president was inaugurated. For them this is what the shutdown is really about.

Exploiting military veterans is something done by both political parties. This particular form is poignant. After all, the Republican Party that closed  the government which closed the parks are accusing the president of doing so.  This shutdown was planned for a long time. It was even codified with a rule change in the House of Representatives.

A closed park is inconvenient. It however is not the most severe pain being felt by veterans at this time. If Palin and the GOP were not simply exploiting military veterans, they would know that.

This government shutdown is affecting the well-being of veteran families and ordinary families. This shutdown has affected the payments of death benefits to the families of veterans. This shutdown is affecting the backlog of veterans’ disability claims. In effect Tea Party Right Wig Republicans applied a significant amount of pain to veterans and their families in order to satisfy an irrational hate of President Obama. That is the height of exploiting military veterans.