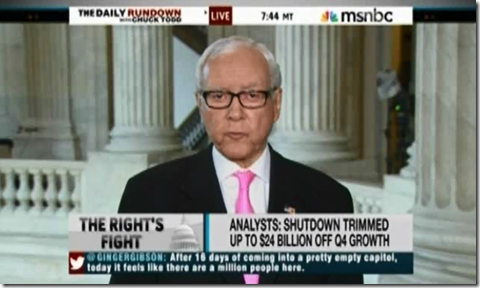 This morning Senator Orrin Hatch was interviewed by Chuck Todd about the Republican government shutdown. Chuck asked Senator Hatch if the shutdown was worth it. His answer was strange. He said it turned out better than they expected because they were able to keep the sequestration numbers.

Really? The Senate had already made that offer before the shutdown. In effect Hatch is admitting that his Republican Party, wasted 2 weeks. They cost the economy 24 billion dollars, .6% of the GDP, and cost the treasury about 3.1 billion dollars. Of course Chuck Todd did not make any of this clear to his audience (journalism failure).

The most striking statement from Hatch was the one he made about Heritage Action, the sister political arm of the Heritage Foundation Think Tank. Hatch actually took the bold move and criticized them.

Has Heritage Action gone to far?

Senator Orrin Hatch: I will be honest with you. The Right is a multiplicity of various groups, some of which aren’t even Republicans, but who think they can control the Republican Party. And some of which have been good Think Tanks in the past but now are losing their reputation because of some of this radicalness.

Chuck Todd: Are you referring to Heritage?

Senator Orrin Hatch: Yeah. Of course I am. Heritage used to be the Conservative organization helping Republicans and helping Conservatives, and helping us to be able to have the best intellectual Conservative ideas. There are some real questions in the minds of many Republicans now. I am not just speaking for myself. For a lot of people that is, Heritage is going to go so political that it really doesn’t amount to anything anymore. I hope not. I am going to try to help it to survive and do well. But right now I think it’s in danger of losing its clout and its power around Washington, DC.

The Heritage Action and Heritage Foundation deserved said excoriation. They are complete political hypocrites. The Affordable Care Act (Obamacare) and the Massachusetts Health Insurance Program (RomneyCare) was the brainchild of the Heritage Foundation. The individual mandate was their idea for instituting personal responsibility. Thy wanted to ensure the human pool would be large enough to maintain very profitable private insurance companies. Now they want politicians to vote against what they once supported.