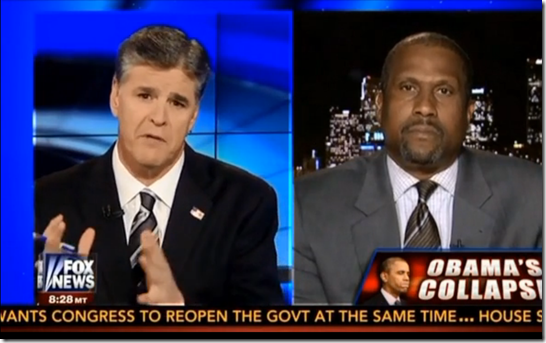 Tavis Smiley is at it again. He told Sean Hannity the following earlier this month.

Hannity: Are Black Americans better off five years into the Obama presidency?

Smiley: Let me answer your question very forthrightly. No they are not. The data is going to indicate sadly that when the Obama administration is over black people would have lost ground in every single leading economic indicating category. On that regard the President ought to be held responsible.

Firstly I find Sean Hannity’s concern for the black community rather amusing given his continual dog whistling style of race bating. Secondly Tavis Smiley’s opinion is just that. It is an opinion that is neither based on fact or context.

Tavis Smiley for some time has been attacking President Obama alongside Dr. Cornell West. They seem to have hoped to be coddled and given preferential treatment by the administration that never materialized.

In an earlier post about Tavis Smiley I wrote the following.

Tavis Smiley was never an ardent supporter of President Obama. That of course is his right. His antagonism of the president during the 2008 Democratic Primaries hit a crescendo when the president did not attend Smiley’s “State Of The Black Union” forum in New Orleans even as Hillary Clinton did. In a further display of uncalled for arrogance, he rejected then Senator Obama’s request to have Michelle Obama represent him at the forum. Further he castigated Senator Obama for distancing himself from Reverend Jeremiah Wright, and for not attending African American events Smiley deemed he should attend. The height of this man’s arrogance, lack of scope, and self-serving hyperbole makes him an unfit spokesman for the cause of the poor and disenfranchised. That Dr. Cornel West has allowed himself to be Tavis Smiley’s sidekick speaks poorly of his judgment.

Please read the entire post as it talks about Tavis Smiley and what one should really be concerned about.

Tavis Smiley, it is supply side economics, not President Obama.

Until there is an honest review of what ails America the cycle of false blame will remain. That it comes from folks who should understand is sad.