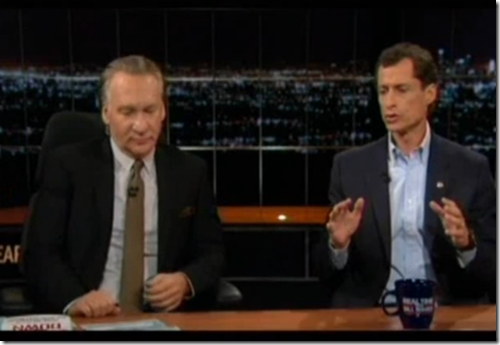 This week’s Real Time with Bill Maher was entertaining and information packed. Anthony Weiner mixed it up with GOPAC's David Avella.

Bill Maher was complaining about the media’s coverage of the Affordable Care Act. He said he saw the hit job Sean Hannity did where he paraded 3 families into his studio. It turned out Obamacare would save two families almost 60% on their insurance and had no effect on the other.

He then discussed NBC’s David Gregory’s incompetence. Mitt Romney told Gregory that each state should craft policies to ensure all citizens are insured and pre-existing conditions are covered. That is exactly what Obamacare does. Gregory did not respond with that fact.

GOPAC’s David Avella saw the media coverage from the GOP’s alternate state of reality. In his mind the media did not report the millions of Americans being hurt by Obamacare. In his mind insurance rates are doubling and tripling. These statements of course are provably false.

Avella also complained about a middle aged man having to have a policy that includes maternity care. Anthony Weiner came back forcefully to illustrate the stupidity of his position. Anthony Weiner reminded him that people buy cars with hooks for baby carriers even though most would not use it. He said, “We do all kinds of things to make things better for all consumers that not every consumer gets.”

Anthony Weiner reminded Avella that currently every one with insurance pays for the uninsured right now in an inefficient manner. He then reminds Avella that private health insurance is the backbone of the substance of Obamacare. “That’s your idea”, he said.

Anthony Weiner is very good at debating. He is good at making his point. It is a shame he could not convert that very well read rhetoric into substantive action.