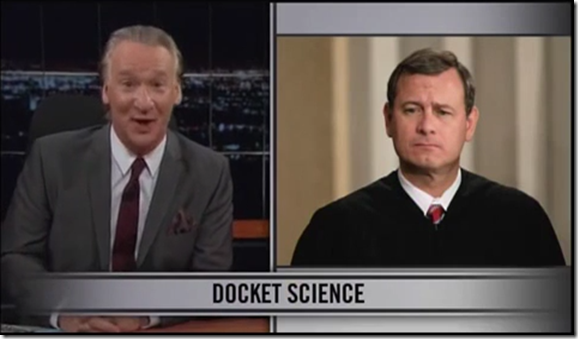 Maher correctly states that twice in three years Supreme Court Chief Justice John Roberts and his Conservative cohort changed the law. They claimed that their Citizens United ruling and Voting Rights Act ruling would cause no harm. Of course the outcome was the complete opposite. “John Roberts is kind of the legal equivalent of the guy in the Hurt Locker. Except in his case he always cuts the wrong wire and everything blows up.”

The Supreme Court Citizens United ruling is dire because it codifies money as free speech. Because corporations or legally persons, it implicitly gives them free speech.  That free speech allows them t spend an inordinate of money in our political discourse

The effects of the Voting Rights Act ruling was almost immediate. Texas attorney general Greg Abbott’s response was via twitter.

Bill Maher correctly states that after the Supreme Court ruling Texas, Mississippi, Alabama, Arkansas, South Carolina, Virginia, and other states immediately moved to make it harder for minorities to vote.