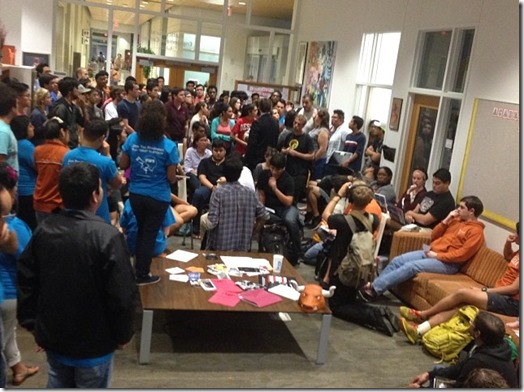 I find it hard to believe this is my alma mater. Back in the 1980’s we were marching for inclusivity. I remember being the President of the Caribbean Central American Association and working for positive change. Everyone was welcomed. Everyone had a place.

Many of us marched on the South Mall as part of the South African Liberation Action Committee to force the University of Texas to divest its investments from South Africa. The Afro American Culture Committee created an atmosphere of sensitivity. Pi Sigma Pi was ensuring that minority engineering students had a safe place while being integrated into the larger body where many viewed minority engineering students with ‘suspicion.’

Nia Wesley, a journalism student at UT, started posting about the Young Conservatives of Texas on Monday. Their stunt is now national news. Sadly it does not reflect the beliefs or actions of most University of Texas students (Longhorns).

The Young Conservatives of Texas (YCT) announced on Monday that they will have an event in which students will ‘catch’ people labeled as ‘illegal immigrants’. They will provide a $25 gift card for the ‘capture.’ This is the same group that orchestrated the ‘Affirmative Action Bake Sale’. Young Conservatives of Texas claims they are trying to spark a conversation about illegal immigration.

The Horn, a site that reports on University of Texas Austin news stated the following.

In response to Young Conservatives of Texas’ (YCT) “Catch an Illegal Immigrant” event planned for Wednesday, students opposed to the event are organizing counter-action responses.

YCT’s event will involve several people labeled as “illegal immigrants” walking around the UT campus, and any student who “catches” one of them and takes them to the YCT table will receive a $25 gift card. The purpose of the event is to create a discussion on the issue of illegal immigration.

The chairman of the Young Conservative of Texas is Lorenzo Garcia. Lorenzo Garcia was a Ted Cruz intern. He was also a Field Representative for Greg Abbott. Abbott’s campaign spokesman Matt Hirsch acknowledged that Garcia worked for Abbott.  He said, “He used to work for us but I think he resigned close to two months ago.” The Greg Abbott campaign sent out an email claiming no association with the event. They called it a repugnant effort.

Nia Wesley said, “We are trying everything we can to represent UT in a different light other than the ignorance YCT has given the media.”

The University of Texas Student Government posted the following on their page.

The president of the University of Texas, Bill powers denounced the Young Conservatives of Texas event. He said that it ““is completely out of line with the values we espouse at The University of Texas at Austin. Our students, faculty and the entire university work hard both to promote diversity and engage in a respectful exchange of ideas.”

Abbott claims that he has no association with the Young Conservatives of Texas. That does not matter. The climate of hate and insensitivity he and his party promote make these types of shenanigans acceptable to their misinformed followers.

I aggregated Nia Wesley’s video snippets below. It gives the flavor of the response by students.

University Of Texas at Austin students have setup an event in solidarity with the 11 million undocumented citizens. Based on the current count, it will be well attended more so than the event by the Young Conservatives of Texas.