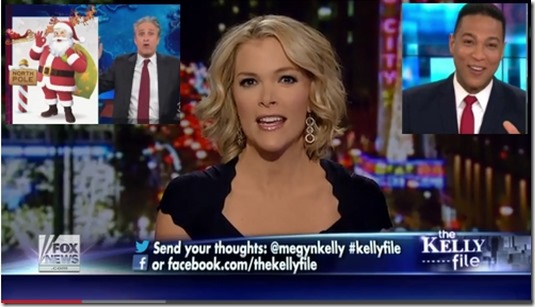 Fox News’ Megyn Kelly is now backtracking in her very ‘assertive’ non apologetic manner. She wants everyone to believe that her comments were just tongue and cheek. They were jokes. People are taking it too seriously. Stating in a rather stern and categorical manner to the multicultural & multiracial fabric of American kids that Santa and Jesus are white to her then, were just facts folks needed to live with.

Santa and Jesus are white. Those are just facts.

Why would Megyn Kelly believe it was necessary to tell any kids listening that Santa and Jesus are white? Her tone was obvious. How could Jesus and Santa be otherwise?

Jon Stewart had to get into the mash up. He brought not only his sarcasm but practical analysis in his rather amusing manner.

In effect Jon Stewart schooled Megyn Kelly on both history and geography. In short, the pigmentation of folks where Jesus and St. Nicholas are from, is actually dark skinned, not white. Jon Stewart addressed the expropriation of historical figures with an amusing skit at the end by Jessica Williams.

Jon Stewart – Real depiction of Santa would put him on the no-fly list?

After Don Lemon got over his laughter from Megyn Kelly’s stupidity, he went into a detailed and serious discussion on the issue. There were no dog whistles are negative characterizations. They just spoke about facts. Jamelle Bouie, Daily Beast staff writer and Eric Marrapodi, editor of CNN’s Belliefe Blog, debunked Megyn Kelly’s assertions.

Megan Kelly was apparently forced to backtrack from her comments. She simply could not believe the uproar that it caused. After all, ‘she was only joking.’

Megyn Kelly backtracks from her silly comments in her acerbic  manner

Megyn Kelly is backtracking not because she made a mistake, but because her dog whistle was disinfected.