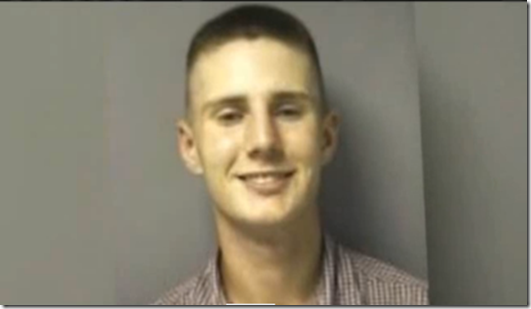 Conrad Alvin Barrett decided that he wanted to play the knockout game. In late November he approached a 79 year old Black elderly man.

According to the press release from the Department of Justice,

According to the complaint, Barrett comments in a video that “the plan is to see if I were to hit a black person, would this be nationally televised?” The complaint further alleges Barrett claims he would not hit “defenseless people” just moments before punching the elderly man in the face. Barrett allegedly hit the man with such force that the man immediately fell to the ground. Barrett then laughed and said “knockout,” as he ran to his vehicle and fled, according to allegations. The complaint indicates the victim suffered two jaw fractures and was hospitalized for several days as a result of the attack.

According to ABC13 Conrad Alvin Barrett was taken into custody this morning. Barrett got caught because he was bragging about the incident in a Fulshear bar on the night of the attack. He allegedly showed the video to an off duty police office.

His phone had 10 other implicating videos. In one of his videos he uses the N-word and said that blacks “…haven’t fully experienced the blessing of evolution.”

Following is the ABC13 story.

CNN reports that George Parnham, Conrad Alvin Barrett’s attorney, said his client has a bipolar disorder and takes medications. He said the affidavit does not pull back Barrett’s layers of mental health.

Earlier today Poppy Harlow appeared as guest on CNN’s Out Front with Don Lemon. She told him she spoke to Barrett’s attorney. She was shock by one of his comments. She said the attorney told her that his client studied anthropology. He said his anthropology professor made almost word for word, the comments Conrad Alvin Barrett made about blacks and evolution. She wonders if that college course would be used as a part of the defense. If Conrad Alvin Barrett is convicted he faced up to 10 years in prison and a $250,000 fine.

The irony of this incident is that in the last few months many on the Right have been attempting to make this supposed knockout game a black on white crime. They have been using overblown incidents of this type by the media to show some false racial divided. In fact Larry Elder wrote a piece in which he said,

The “knockout game” – and the media underreporting of it – combines the breakdown of the family with the media’s condescending determination to serve as a public relations bureau for blacks.

Don Lemon asked Marc Lamont Hill on CNN’s Out Front whether this case turns the stereotype on its head or of there is more to this type of story. Hill said the narrative of the supposed surge of this type of crime of black youth against white people was never the case. He said this vicious crime, the so called knockout game, is perpetrated by people of all races. There is no racial pattern. It is simply irresponsible people executing a violent irresponsible act.