Income Inequality Is Not The Winning Message 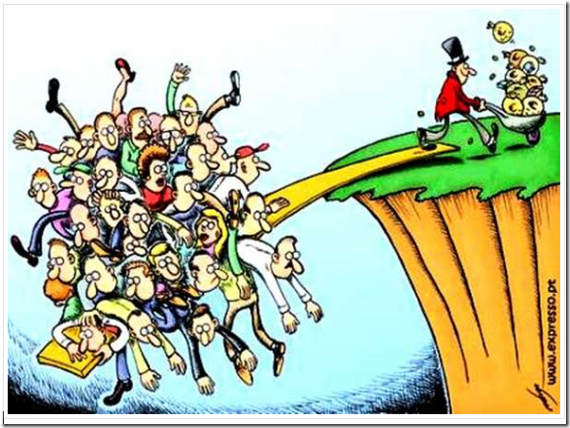 Pure scientist, pure engineers, and real economists love numbers. They love statistics. They know that given a specific input, known degrees of freedoms, and processes the output is deterministic. They are digital. Things either work or they don’t.

Most people aren’t scientists, engineers, or economists. They are analog. An old LP with a scratch will still play. The Doppler effect on sound from a moving object means the same sound has a different frequency to the listener. External noise can change the interpretation of a signal (for the purist digital data is usually accompanied by built-in correction).

The assumption is that if citizens know the data, they will make the right choices. Unfortunately that is not the case. It is not the case because as analogs, external noise masks the actual condition and message.

Paul Krugman wrote an article this week in which he seemed relieved that progressives have stopped apologizing for their efforts on behalf of the poor. He said progressives have started trumpeting them instead. He said that conservatives find themselves on the defensive.

Are conservatives really on the defensive or are they retooling their message? The latter is more likely. Why? Most Americans are analogs and conservatives know that. Most progressives have not yet internalized what that means. Noise will always affect an unshielded valid signal.

Conservatives will continue to use noise because it is effective. They will modify their wedge issues appropriately.

Most people know the numbers. Red States take more from the government than they take in. Poverty rates in Red States are higher. Yet Mitt Romney was able to win 40 percent of the union vote and 38 percent of those making under $50,000.

Conservatives did not use real numbers and statistics to curb the war on poverty. They used anger. Anger is a lot more powerful than sympathy or empathy. They used two types of anger. They created an anger of being stolen from. They also created that stereotypical lazy black welfare queen to also play on carnal racism.

Conservatives will be ready as progressives move on the offensive with their war on poverty, income inequality, and wealth disparity message. The formulation of the message has begun. It will have similar racial overtones. The economic message however will be adjusted to the realities progressives will highlight.

Many affected by income inequality prefer to deny their own socioeconomic realities.

Nobody wants to be like the poor. Nobody wants to believe they can become poor. Sometimes one’s dignity requires placating one’s socio-economic condition. These behaviors work well for conservatives.

Conservatives have begun spinning Johnson’s Great Society as a failure and the cause for the economic condition. They will ‘racialize’ the message to work on that carnal fear still residing in many. It will be different however. Instead of them taking something from you, it will be progressives think you are like those people who cannot fend for themselves.

In my very conservative town, I have seen acquaintances going through hard times. Their expensive homes are near foreclosure. They have no health insurance. They are struggling because the new job does not pay the wages their managerial jobs paid. Yet, they feel okay because they are able to convince themselves they are not poor or like those other poor folks.

Income Inequality is the result. Denial of appropriate worth is the cause.

By promoting trickle down type messages conservatives always promote that that guy up there is more worthy than you. If he does well you will. That message must be turned into the welfare king message. The king takes it all and gives the scraps to the less worthy. Progressives must turn the message on its head.