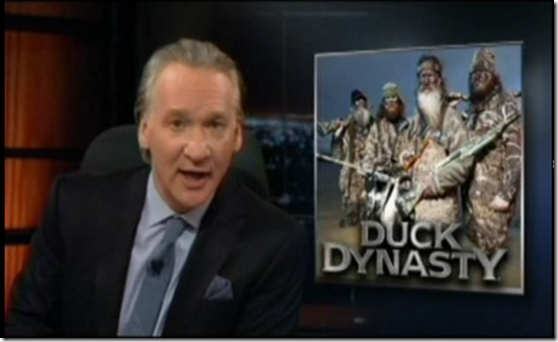 Friday was the premier of this season’s Real Time with Bill Maher. It did not disappoint. As usual everyone was privy to Bill Maher’s generally well thought out sarcasm and satire. He had two bona fide Democrats, Governor Jennifer Granholm and James Carville on the show. He also had two Republicans, an apparently drunk Mary Matalin and Steve Schmidt.

Bill Maher started the show with a good one. He lamented the state of the environment but loved what can now be burned in some states. “That’s the bad news, California is burning,” he said. “The good news is Colorado is smoking.”

The show covered the major topics currently debated in the political sphere. It covered the NSA, Chris Christie’s Bridgegate scandal, the West Virginia spill, the environment, and the minimum wage. The Republicans on the panel provided the same talking points in an attempt to justify their beliefs that have continuously failed Americans.

Bill Maher had best left his best statement for the last new rule. He had an advise for Republicans. He used the Duck Dynasty fiasco as his analogy for what Republicans have done to this country with smoke and mirrors.

“And finally, a resolution I have been asking America to make for a long time,” Bill Maher said. “Be more cynical. Be less easily fooled. Case in point, all the people that are fans of these guys, heroes to all the rural heartland traditional values gun nuts out there. Except here is what we recently found out these guys really look like before they got their TV show, preppy a$$holes at the golf club wearing Tommy Bahama. That’s right. It is all an act, fat cats pretending to be just folks. And you fell for it. Take a hint Tea Partiers. This is what the Republican Party is always doing to you”.

Americans should heed his comment. It is OK to be fooled once. It is OK that one has been misled. When one is informed and refuses to see the light, then that becomes willful ignorance. Mike Stafford, a Republican Operative turned Independent will be interviewed on this week’s Politics Done Right. He has been trying to be a sensible voice in the Republican Party. He realized he just could do it no more. He wrote this compelling piece  that shows what occurs when eyes are opened to reality.

Bill Maher’s call out of the Duck Dynasty deception is important. As others see reality versus false rhetoric, the change in our politics will occur.