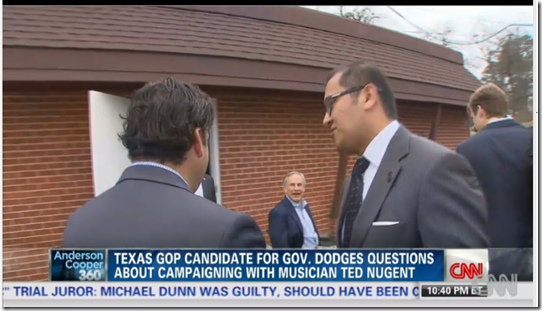 Texas gubernatorial candidate Greg Abbott was happy to embrace Ted Nugent at a recent campaign event in Denton, Texas. He probably did not expect it to make national news.

CNN’s Ed Lavandera attempted to question Greg Abbott’s ill-advised choice of using Ted Nugent in his campaign. Greg Abbott initially tried to change the subject to Senator Wendy Davis, his likely Democratic opponent. He claimed he used Ted Nugent to expose Wendy Davis for flip flopping on 2nd amendment rights. Ed Lavandera then asked Greg Abbott why he needed to specifically use Ted Nugent given the gun friendly nature of Texas. Greg Abbott ignored Ed Lavandera ’s questions and went on to respond to other reporters.

Later on during a news conference Ed Lavandera attempted again to get more information from Greg Abbott about his choice of having Ted Nugent campaign for him. Abbott’s communication director got in front of the camera as things got a little bit out of hand. Near the end one can see Greg Abbott and his entourage high tailing it to the car. They were quickly whisked away.