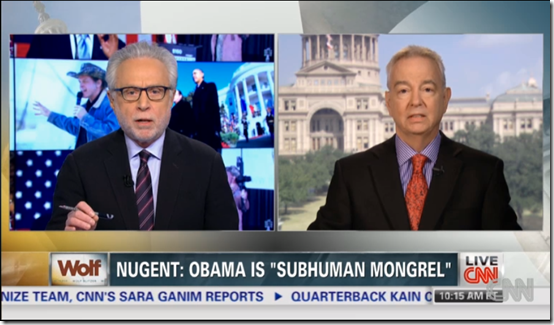 When the Greg Abbott campaign made an issue about Wendy Davis’ real personal story, it was all over the airwaves. On had to ask why. Even as the Chris Christie story was hot, the media concentrated on the Wendy Davis personal non-story. Her  story speaks for itself. Yet the media fell into the trap.

Greg Abbott recently campaigned with Ted Nugent. This many have triggered Wolf Blitzer to finally engage more fully in the Texas election. Wolf Blitzer spent quite a bit of time recently condemning the past bad acts of Ted Nugent. According to Media Matters,

During the February 18 edition of Wolf on CNN, Blitzer invited Dallas Morning News reporter Wayne Slater to discuss the ongoing controversy. According to Blitzer, “Nugent’s presence hit a sour note with a lot of people. They say Texans deserve better than a candidate who would align himself with someone like Nugent who offered a hate-filled assessment of the president.” Blitzer went on to state, “Shockingly, Abbott’s campaign brushed aside the criticism, saying they value Nugent’s commitment to the Second Amendment.”

Slater added, “The problem here is when you call the president a subhuman mongrel, which has not only a disparaging reference but also a historic racial reference in some places, and then when you call feminine women politicians fat pigs, then Abbott has to make a decision. And he had to say do I keep Ted Nugent on the stage with me, or not. He has chosen to do so.” Slater also argued that Nugent’s absolutist interpretation of the Second Amendment allowed some conservatives to look past his inflammatory rhetoric:

There are more important Texas policy issues that are of much more importance for national engagement. Republicans leaving much of their population without health insurance for ideological reasons kill. Just like Wolf Blitzer, CNN, and other national news outlets are obsessed with capital murder, they should be as well with healthcare denial in Texas. After all that is capital murder by a different name and execution tool.