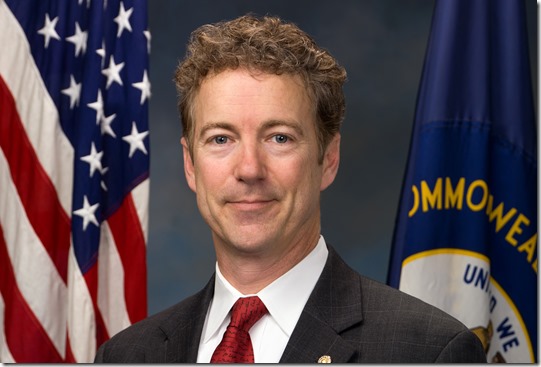 A few weeks ago this article, raised the ire of many. It explored whether Hillary Clinton was the president we needed at this time. It explored some of her major weaknesses. It also wondered if an Elizabeth Warren like candidate would be a better fit. The article concluded the following.

Many believed that the populist Republican being referred to was Rand Paul. That was not necessarily the case then, however it is now. This is not some naïve judgment. It is something that Democrats better take seriously before the coronation of our candidate. We better have a credible populist in the wing.

Rand Paul visited Howard University, one of the bastions of Black ‘intelligencia’. He had a few bouts of condescension. That said, Black folks are used to unnecessary pander when visited by white conservative or liberal politicians who generally do not mingle with them. What he had to say about many policies rank and file Democrats seem to run from have legs in communities who have seen the status quo maintained on drug and prison policies.

Rand Paul’s recent immigration comments are lacking. However a statement like the following has traction even with some Latinos, Africans, and South Asians who simply want papers to stay.

“Are you willing to try to bring the 11 million people who are here, bring them out of the shadows, give them an existence, try to be more humane, and try to get a better situation for them? That could happen tomorrow,” Paul said on ABC’s “This Week.”

“The problem is, is the sticking point going to be we have to have immediate voting privileges for those who came here illegally,” Paul added. “If the Democrats are willing to come halfway, I think we can pass some meaningful reform.”

Rand Paul visited the lion’s den of liberalism, the University of California-Berkeley. In the speech he attacks the NSA and the CIA. This is something many young voters like. But this exchange appearing in Politico’s article is probative.

During the question-and-answer portion of the appearance, the moderator began, “There’s been pretty extensive media coverage of your recent visits to places that don’t usually vote Republican, like students at Howard University …”

“You mean like Berkeley?” Paul interjected, to laughter and applause.

Asked whether such efforts are an attempt to broaden his “personal appeal” ahead of 2016, Paul responded coyly, “Maybe.”

Anyone who reads DailyKOS and other liberal and progressive blogs cannot be fooled by Rand Paul. Rand Paul is a true Republican Libertarian with a touch of ‘Dixiecratocracy’. The problem is that most voting Americans are not the well informed. Most of the traditional media are lazy or programmed to misinform by the plutocracy.

Rand Paul does not need to blow up the Obama coalition to win. He simply needs to skim the fat. His little excursions into the liberal base can do just that. His base is much more committed to winning and voting than our base. The Florida-13 election was probative.

It would be irresponsible if liberals do not start taking serious steps now to be inoculated on the populous flank. This will help not only in the presidential race but in every district.

The biggest fear is that if there is a coronation of a select few, many potential candidates remain undeveloped. Worse is the inability to recover from an unknown. The fact that Ronald Reagan and George Bush were elected presidents of the United States means it is not farfetched that Rand Paul could be our next president.