Wendy Davis attended church in Humble, Texas, a town in the Northeast Houston metropolitan area, on Sunday. She was very well received. 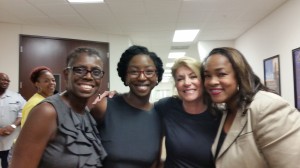 “Wendy Davis displayed a warmth seldom seen in politicians,” said Linda. “She was not hurried and seemed ready to engage everyone who wanted to speak to her.”

She made a connection with the audience. She showed that ability to empathize with people in every socio-economic class because she herself has been a member of most of them. Much of that story was covered in the articles “Wendy Davis Tells Her Uplifting Story. She Will Be Texas Governor” and “This Is The Speech That Will Make Wendy Davis Texas Governor.”

Churches do not endorse candidates. However, Pastor Sloan’s words should be a blessing to Wendy Davis’ ears.

“I am so encouraged. … Your story I followed for several years. I am from Sherman Texas,” Pastor Timothy Sloan said. “You may not have ever known that. I know you from your time in Fort Worth. Your story resonates with so many in here. I am a product of a single parent home, a mother who sacrificed everything so that I can be where I am at today. We salute you for that incredible story. But even more for the commitment you’ve made to the political future of this state and what you have done for the great state of Texas. So I thank God that in just a few moments God is going to do something pretty amazing with Miss Wendy Davis in this state of Texas. Come on let’s celebrate.”

It is clear that Wendy Davis intends to touch and feel every community throughout the state. She has spent many Saturdays and Sundays in Harris County block walking and introducing herself to various communities. That is how you win what must be a grassroots campaign in a state entrenched in a culture where most do not vote. The grassroots must turn out the vote. Texans must vote.