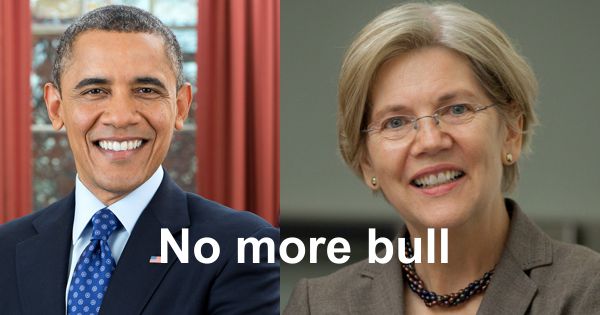 Elizabeth Warren is justifiably upset. One of America’s last bastions of true liberalism and progressivism is slamming the President for his nomination of another Wall Street bull. Last Wednesday President Obama nominated Antonio Weiss to serve as Under Secretary for Domestic Finance at the Treasury Department.

Lazard was instrumental in Burger King’s acquisition of  Tim Hortons for the purpose of a tax inversion / corporate inversion. In other words they helped arrange the purchase in which the American tax payers will get stiffed. Burger King built its prowess in America with the security, education, and prosperity of its offerings. It then renounces its American corporate citizenship and adopts that of the company it purchases as it stiffs Americans of their future taxes due.

The culture of investment banks assumes these actions are in the best interests of the investors they represent. It definitely is not in the interest of the average American.

Elizabeth Warren wrote a stinging rebuke of President Obama for nominating Antonio Weiss in a Huffington Post blog post titled “Enough Is Enough: The President’s Latest Wall Street Nominee” in which she laid out the case against Weiss and nominees like him. She first illustrates that she has been loyal to the President but will not be at the expense of the average American.

I believe President Obama deserves deference in picking his team, and I’ve generally tried to give him that. But enough is enough.

Last Wednesday, President Obama announced his nomination of Antonio Weiss to serve as Under Secretary for Domestic Finance at the Treasury Department. This is a position that oversees Dodd-Frank implementation and a wide range of banking and economic policymaking issues, including consumer protection.

So who is Antonio Weiss? He’s the head of global investment banking for the financial giant Lazard. He has spent the last 20 years of his career at Lazard — most of it advising on international mergers and acquisitions

Elizabeth Warren then states that Antonio Weiss is unqualified for the job.

Neither his background nor his professional experience makes him qualified to oversee consumer protection and domestic regulatory functions at the Treasury. As someone who has spent my career focused on domestic economic issues, including a stint of my own at the Treasury Department, I know how important these issues are and how much the people in Treasury can shape policies. I also know that there are a lot of people who have spent their careers focused on these issues, and Weiss isn’t one of them.

Elizabeth Warren in no uncertain terms scolds President Obama and the Democratic party for being Wall Street heavy. This has been a complaint for some time which has eroded the real progressive / liberal nature of the Democratic Party. In fact it has led many believe there is little difference between parties which is patently false.

Third, there’s the larger, more general issue of Wall Street executives dominating the Obama administration, as well as the Democratic Party’s, overall economic policymaking apparatus. I wrote about this problem a couple of months ago on The Huffington Post in more detail.

Elizabeth Warren’s last three paragraph should be heeded. It is a reason why she presents a much better alternative to Hillary Clinton if she could build enough name recognition throughout the country. I covered this in my article “Is Hillary Clinton The President We Need At This Time?” a few months ago. Krystal Ball covered this as well in this post.

I have voted against only one of President Obama’s nominees: Michael Froman, a Citigroup alumnus who is currently storming the halls of Congress as U.S. Trade Representative pushing trade deals that threaten to undermine financial regulation, workers’ rights, and environmental protections. Enough is enough.

It’s time for the Obama administration to loosen the hold that Wall Street banks have over economic policy making. Sure, big banks are important, but running this economy for American families is a lot more important.

Elizabeth Warren remain the watchdog and champion in the Democratic Party. I think it’s time for her or someone like her to take the reigns.