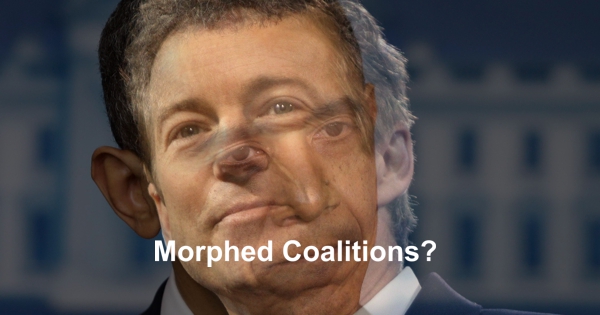 This week Rand Paul officially announced that he is running for the Republican presidential nomination. Liberal elites laughed. They believe that this first year senator does not stand a chance either in the Republican primary or the general election. The Republican establishment however knows better. They spent a million dollars on the day Rand Paul launched his campaign to bloody him up. One does not spend that kind of money if one really believes the adversary does not stand a chance or is a joke.

A few months ago I wrote the piece, “Don’t laugh but Rand Paul could be our next president” and posted it at the DailyKOS and at the Coffee Party USA Facebook Page. The blowback was intense and immediate. The problem is that most are not thinking strategically. They are thinking with their hearts.

Rand Paul’s biggest problem will be winning the Republican Primary. That is why Lindsey Graham, the Republican Establishment, and the neocons are all in attack mode. It was evident from his announcement speech that he knows that. It is also evident that his team carved out a subsection of the Republican Party to leave the ideologues to their respective candidates.

Rand Paul even implicitly acknowledged a skewed social justice system in America. He said, “I see an America where criminal justice is applied equally and any law that disproportionately incarcerates people of color is repealed.” Has Hillary Clinton or any Democrat after years of having a lock on the Black and Brown vote ever put that center stage? Interestingly, Rand Paul was the first and one of the only Presidential prospects to speak up and even write an op-ed about conditions in Ferguson Missouri and throughout the country. He awkwardly visited predominantly Black Howard University and engaged the students on social justice issues and though he was summarily schooled the effort was appreciated. He visited Berkeley where he was very well received.

Rand Paul showed some independence from the Republican Party over the years with a set of interesting acts. He spoke out against the prophet of the Republican Party, the Almighty Ronald Reagan. He said, “The reason the deficits exploded is they ignored spending. Domestic spending went up at a greater clip under Reagan than it did under Carter. …  Jimmy Carter’s last budget was about $34 or $36 billion in debt. Well, it turns out, Reagan’s first budget turned out to be $110 billion dollars in debt. And each successive year, the deficit rose throughout Reagan’s two terms.” Rand Paul has even said that his Party’s brand ‘sucks’.

I will reiterate what I said in the piece “Don’t laugh but Rand Paul could be our next president” to be clear.

Anyone who reads DailyKOS and other liberal and progressive blogs cannot be fooled by Rand Paul. Rand Paul is a true Republican Libertarian with a touch of ‘Dixiecratocracy’. The problem is that most voting Americans are not the well informed. Most of the traditional media are lazy or programmed to misinform by the plutocracy.

Rand Paul does not need to blow up the Obama coalition to win. He simply needs to skim the fat. His little excursions into the liberal base can do just that. His base is much more committed to winning and voting than our base. The Florida-13 election was probative.

It would be irresponsible if liberals do not start taking serious steps now to be inoculated on the populous flank. This will help not only in the presidential race but in every district.

The biggest fear is that if there is a coronation of a select few, many potential candidates remain undeveloped. Worse is the inability to recover from an unknown. The fact that Ronald Reagan and George Bush were elected presidents of the United States means it is not farfetched that Rand Paul could be our next president.

Americans don’t live in the past. They live in a reality show based kind of today. It is not enough to remind Americans of all that Rand Paul stood for in the past. After-all, America loves the redemption story. If you do not believe it, does anyone remember a famous Southern governor named George Wallace?

If Rand Paul makes it through the Republican Primary, he will make Hillary Clinton a continuation of President Obama’s socio-economic and social justice Republican induced failures. To be more blunt, Rand Paul will win if he is successful in morphing the Obama coalition into the Rand Paul Coalition. It will be different than the Obama Coalition but a coalition no less.