I will be frank. I enjoy crashing Tea Party  events. It is exciting when I am mostly sure that most people do not have a clue that my ideology is diametrically opposed to theirs. It is amazing what I can learn from unfiltered utterances.

It is also exciting when I engage with them in an adversarial but civil manner. After-all, in an ideal world that is how one comes to a consensus that all can accept.

This week I attended a large Tea Party rally in Kingwood Texas. The first thing that was clear is that diversity was absent. There were between 500 to 800 people there based on my empirical count. I counted four black women and two black men. I guess I was the third black man. One thing that was obvious is that most in the crowd bent over backwards to make me feel welcomed. I cannot see what is in anyone’s heart but I can see their actions.

I joked on my Facebook page that I got better treatment at this Tea Party rally than at my Liberal Netroots Nation conference in Phoenix Arizona last July. There was some truth to that statement based on several incidents that occurred atthe macro level at Netroots Nation 2015  that I covered before. 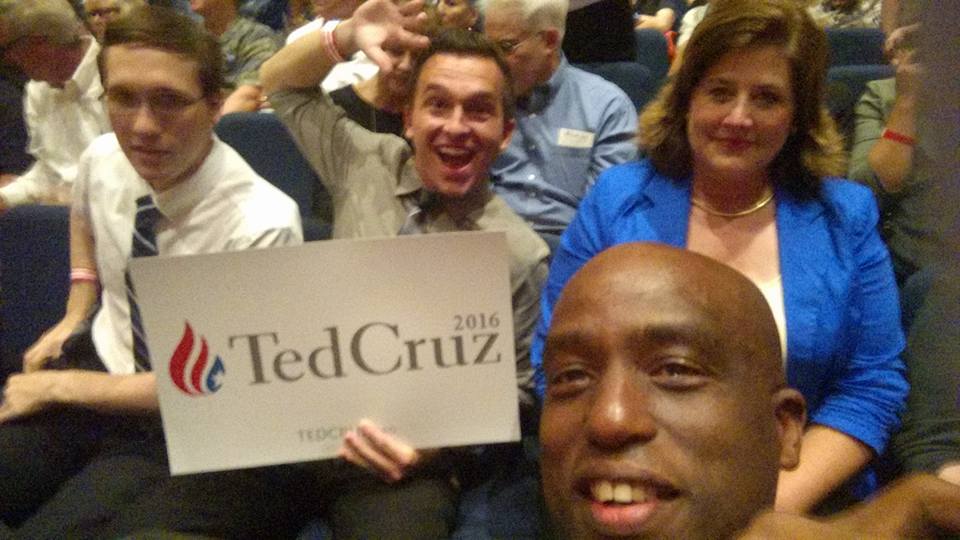 There were several Texas politicians that spoke. Texas Lieutenant Governor Dan Patrick spent much of his time bragging about the new conservative prowess in the TexasLegislature. Indicted Texas Attorney General Ken Paxton spent his time talking up a freedom very few would think is under threat.

Ted Cruz was the keynote speaker. His fire brand speech bordered on a surreal religious indoctrinating experience. He went through the five things he would do on day one if elected president — 1) Rescind President Obama’s executive orders, 2) Investigate planned parenthood, 3) End persecution of religious liberty, 4) Rip to shreds the Iranian nuclear deal, 5) Move the American embassy in Israel to the city of Jerusalem. After the first day, Ted Cruz said he would 1) Go to Congress and get every word of Obamacare repealed, 2) Instruct the Department of Education to end Common Core, 3) Rebuild the military, 4) Protect the rights of military to bear arms, 5) Secure the border and end sanctuary cities, 6) Take on the EPA, and the CFPB, and the alphabet soup of regulators, 7) Go to Congress to pass a flat tax, 8) Abolish the IRS, and 9) Re-task 90,000 IRS workers to the border.

At the end of the church service, I mean Tea Party rally, the people were in a frenzy. A woman saw me videoing the entire event and gave me her personal email information so I could send her a copy. And many others would want it too. The reactions were surreal. My experience was surreal.

There is no chance that I could ever be persuaded to follow that which has nothing to offer to middle-class and poor America. There is no chance that I would join a movement devoid of truth, empathy, and dignity. It is however a certainty that I will continue to engage all. I still believe that whether one accepts debunking truths or not, a seed is planted that is just waiting on the necessary catalyst to sprout.