Donald Trump called the country he is president of foolish at his Helsinki summit with Vladimir Putin. One could consider many of his answers treasonous. Even Fox News' Fox & Friends criticized Trump's performance. Is this the start of holding him accountable.

When Fox News' programs including Fox & Friends called out Donald Trump as 'falling short' in his treasonous Helsinki press conference, it means he's in trouble. 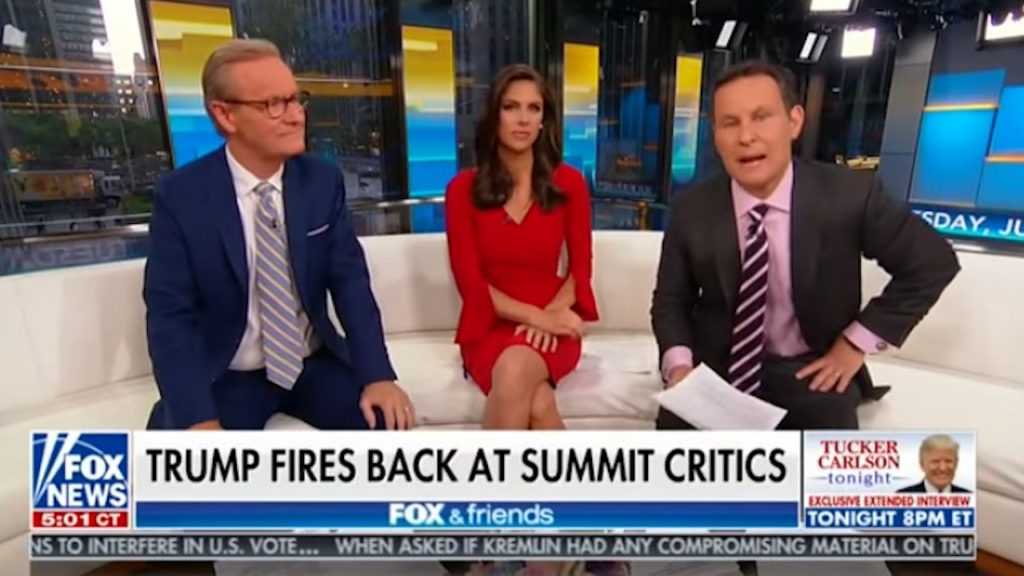 The following exchange should scare Donald Trump. When you've lost Fox News, it means the dam is in peril and could give at any time.

Trump called the country he is president of foolish at his Helsinki summit with Vladimir Putin. One could consider many of his answers treasonous. Even Fox News' Fox & Friends criticized Trump's performance. Is this the start of holding him accountable? https://t.co/tY6K8Ja190 pic.twitter.com/Nq6q5EmQhd

Brian Kilmeade: Two hours one-on-one. Then about an hour of a bilateral. Then a 15-minute break, perhaps and it was time to meet the press. At which time you knew the first series of questions were going to be about Russia meddling in the election. Thanks to Robert Mueller's probe, we know the 12 names of the people at least on the Russian side, state-sponsored, if these numbers are correct, we have no reason not to believe it, who were part of the hacking into the election. Not affecting the result, but going ahead and creating chaos in our electoral system. When President Trump was asked about that, he fell short.

Steve Doocy: And so the criticism of the president from both sides of the aisle is, wait a minute, you were given a choice, do you believe Russia or do you believe your own intel community, and he had that answer, which is puzzling to me because there have been a number of times when the president has said that I think it was Russia. I think it was Russia. I think there was meddling. He had the chance yesterday. He did not do it. And that has got a lot of people scratching and a lot of people criticizing him for not being bold.

Abby Huntsman: Well, and you're standing next to Vladimir Putin whose ultimate goal in life is to undermine our democracy. So it was that one moment that had you to stand up for your own country, to stand up for your intelligence community. As we said this morning he did not do that.

Abby Huntsman's statement was the best of them all, but she stopped short of stating the most critical point. Donald Trump appeared to be a puppet of Putin. Worse, his words bordered on treason.