It always bugged me hearing about Bill Clinton being America's first black president even though we all understood what that meant. The thing is, Clinton always used black people as a tool to achieve an outcome. I usually leave this alone, but that picture just showed up in my inbox from FAIR. And my blood started to boil. I don't generally write when I am upset but here I must or else I would not write this at all.

I preach that race is social construct used by the few to control the many. It is a rather inept and outdated concept. Though in the real world it must be a part of our discourse till we extricate the pathology. I have discussed enough of this at length. It is one reason anyone who get into conversations with me irrespective of their race, religion, creed, are culture eventually have no problems being honest with their thoughts on it or just on racial issues in general.

Below is the photo op of Bill Clinton signing the welfare reform bill, Personal Responsibility and Work Opportunity Reconciliation Act of 1996 (PRWORA), in 1996. Before I go into my prose, I have an ask. Please give an honest assessment of what draws your attention in the photograph and its meaning. I ask for full unabashed honesty without fear of judgment. I want your initial visceral reaction. 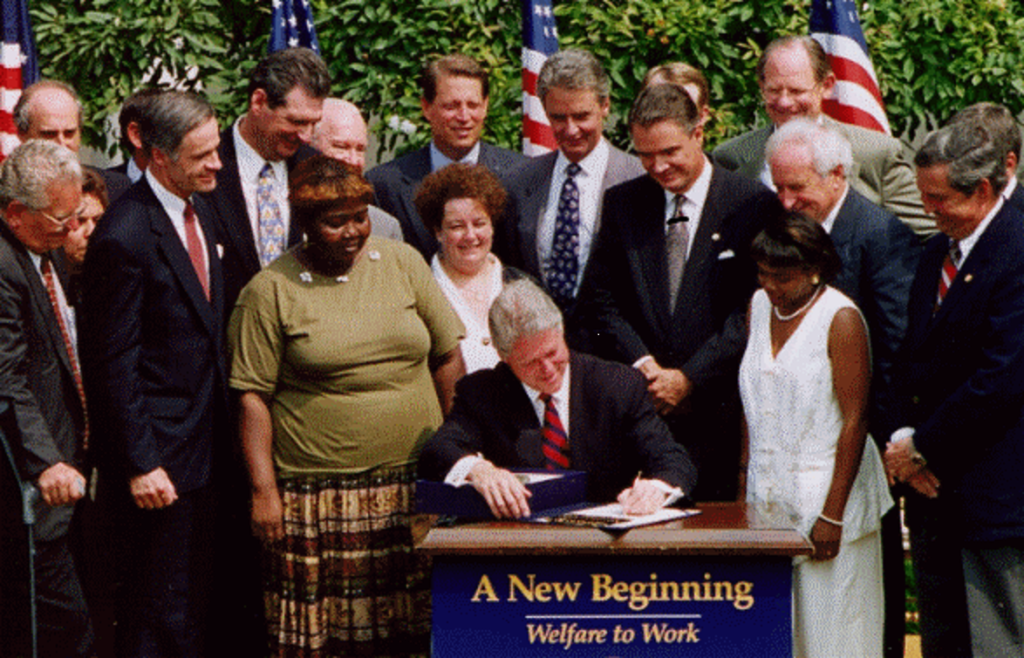 Before discussing my disgust for this picture, I want everyone to recall an incident when Clinton was running for President. Many remember Clinton's attack on rapper Sistah Souljah. He mischaracterized her comments which out of his mouth made Sistah Souljah seem like a vapid racist.  Here is the clip from Clinton's statement attacking her that seemed reasonable.

Fortunately for Clinton, even the Liberal Media suffers from the same disease America suffers at large. Sistah Souljah had a robust response which first made it clear she was not some patsy or uneducated wrapper. She then went on to contrast her morality to Clinton's. Finally, she explained the real context in which her she made her statements. Her response is necessarily long, but please listen to the entire answer here if you are interested in real meaning.

The picture above does two things. It sears in the minds of many white people that welfare abuse or that the majority of people in welfare are black. Ironically, it does the same thing for people of color. Second, it shows a cadre of white men, including a discernable and now convicted pedophile, wards of the pharmaceutical industry, among others. To be clear, most people on welfare are white.

Moreover, poverty is much more rampant in rural areas than in urban areas. The constant mischaracterization is one of the components in the formula that got Trump elected. A large percentage of his voters did not realize on whose side they belonged. From Newsweek,

In fact, whites are the biggest beneficiaries when it comes to government safety-net programs like the Temporary Assistance for Needy Families, commonly referred to as welfare. White people without a college degree ages 18 to 64 are the largest class of adults lifted out of poverty by such programs, according to the Center on Budget and Policy Priorities. The think tank’s 2017 report stated that 6.2 million working-age whites were lifted above the poverty line in 2014 compared to 2.8 million blacks and 2.4 million Hispanics.

When it comes the Supplemental Nutrition Assistance Program, or SNAP—the initiative formerly known as food stamps—the numbers look similar. Just over 40 percent of SNAP recipients are white. Another 25.7 percent are black, 10.3 percent are Hispanic, 2.1 percent are Asian and 1.2 percent are Native American, according to a 2015 Department of Agriculture report.

Even out of office, Bill Clinton showed his ability to use race as a tool. CNN reported the following during the South Carolina primary where Obama subsequently beat Clinton. I wrote this in my book "As I See It: Class Warfare The Only Resort To Right Wing Doom."

I was already a bit perturbed with some of the overtones from former President Clinton’s dismissal of Obama’s primary victory in South Carolina by equating it to then Jesse Jackson’s victory a few years back. Clinton is a very intelligent man and I am sure that even though I believe he does not have a prejudice bone in his body, he was willing to use subliminal racial inflections to taint Obama’s victory. Though I supported Mrs. Clinton, no one could equate Obama’s politics with Jackson’s. There were many more relevant comparisons. I made my break from Hillary in February though I was still not sure if Obama could break the “racial barrier” and win.

Many other incidents illustrate how Bill Clinton, not unlike many other politicians have attempted to misrepresent people of color for gain. They try to use some action against people of color with the expectation of winning more white votes than what they would otherwise lose from the deception. We can only get around these issues if we can be honest in talking about them. Just like viruses and bacteria exposed to light can render them ineffective; so can exposing this behavior in an honest manner.