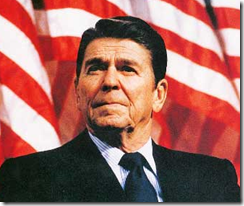 President Obama in an interview during his primaries called President Reagan a transformative president. He did not mean it as a complement but as kudos to what he was able to accomplish, have America support policies that are diametrically against their own interest. This is evident when one examines his last inaugural speech and contrast it with Reagan’ motto; "government is not the solution to our problems; government is the problem.”

Liberals believed Reagan was Satan incarnate. Compared to the crop of Conservative Right Wing Republicans, Reagan was simply Paul. After all Paul went from the destructive Saul of Tarsus to Paul the apostle. Not that Reagan redeemed his ways; he just became marginally pragmatic, from voodoo economics to simply mathematically deficient economics.

Today’s Right Wing Republicans sing Reagan’s praises for every bad deed they attempt to move forward. With a clear record that shows they share little in common with their Messiah, they make willful ignorance vogue. One can only wonder if Reagan could win in today’s Republican Party. After all, he was divorced, raised two very Liberal kids (Ron and Patti who pose for Playboy), and had lunch with many Liberal politicians.

Reagan while following a proven failed economic policy, never displayed the hate the current crop of Right Wing Republicans have shown for immigrants, women rights, human rights, and the social safety net. It is obvious why many Liberals yearn to work with Republicans like Reagan in retrospect. Ronnie, Liberals really miss you.