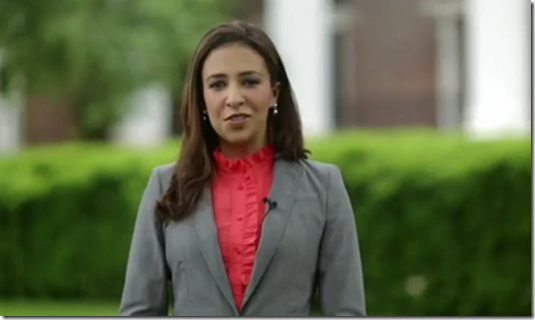 Here we go again. Another Republican shows his racial ‘bona fides’. It is not enough that Erika Harold is a Harvard Law graduate and Miss America. The only thing that matters to Montgomery County Illinois Republican Chairman is that in his mind she is a black Republican congressional candidate who is unworthy to serve.

“Outrageous comments like those of Jim Allen are why we as Republicans fail to gain any respect from minority voters,” said Doug Ibendal, Editor-In-Chief of Republican News Watch. ”If officials in my party (the Republican Party) fail to understand how destructive it is to attack an impressive person like Erika Harold merely because she dares to challenge the good-old-boys, the GOP will remain a losing party for decades. This stay-in-the-back-of-the-bus mentality destroys any hope the Republican Party has for regaining momentum in future elections.”

We will let Chairman Allen’s words speak for themselves.

Rodney Davis will win and the love child of the D.N.C. will be back in Shitcago by May of 2014 working for some law firm that needs to meet their quota for minority hires.

The truth is Nancy Pelosi and the DEMOCRAT party want this seat. So they called RINO Timmy Johnson to be their pack mule and get little queen to run.

Ann Callis gets a free ride through a primary and Rodney Davis has a battle.

The little queen touts her abstinence and she won the crown because she got bullied in school,,,boohoo..kids are cruel, life sucks and you move on..Now, miss queen is being used like a street walker and her pimps are the DEMOCRAT PARTY and RINO REPUBLICANS…These pimps want something they can’t get,,, the seat held by a conservative REPUBLICAN  Rodney Davis and Nancy Pelosi can’t stand it..

Little Queenie and Nancy Pelosi have so much in common but the one thing that stands out the most.. both are FORMER QUEENS, their crowns are tarnished and time has run out on the both of them.. [source]

For anyone believing that this GOP lack of sensitivity is an anomaly, one just have to check out this Jon Stewart montage, this from Oklahoman Republican State Representative Dennis Johnson, this from GOP Senator Grassley, this from Texas Tea Party GOP Leader Ken Emanuelson , this from South Carolina state Rep. Kris Crawford (R), and this from Arkansas Republican State Senator Jason Rapart.

The sentiments in that email verbalizes what many know are intrinsic within the current Republican ideology. Many of the members have been taught to view minorities as the other, those people who cannot make it on their own, and those people whose success or credentials are attributed not to hard work and intellect but a take away from good ‘white’ people. After years of this indoctrination with false narratives and lies, this hate and disdain for ‘the other’ becomes a part of the Republican fabric.

Inasmuch as many good Republicans would like to change the dynamics of the party, it cannot occur without a systematic purging of its leaders and an atonement and plea for forgiveness for the damage done to this country racially (and financially, though the financial part is out of the scope of this post). Many good Republicans have been complicit with their silence, their willful ignorance, or by simply looking the other way.

Kudos must be given to Republican News Watch for exposing this racist. This is what it will take, leaders in the Republican Party beginning to out their own and starting a purge of the rotten apples in the barrel.