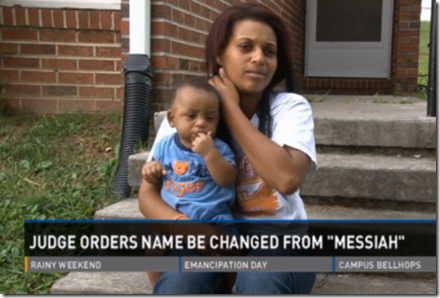 This story seems unreal in the United States of America. In short, Lu Ann Ballew, the Child Support Magistrate who serves the 4th Judicial District of Tennessee that includes Cocke, Grainger, Jefferson, and Sevier counties, renamed a Tennessee's mother’s child’s name. She did this based on her own religious beliefs and the preponderance of the Christian religion in the child’s surroundings.

This is more serious than it seems on the surface. Many in the Right Wing get upset when they are compared to the Taliban, yet the type of control they attempt to take on the civil liberties and freedoms of citizens is immediately visible. The attempt in Tennessee and in various states governed by Right Wing politicians to pass laws against non-existent Sharia Laws as cover for their attempt at their own theocracy and ideological dominance is dangerous.

According to the The Tennessean the parents of baby Messiah were in a dispute over his last name. They went to court for a resolution.

The name change was part of Judge Ballew’s case; however, the parents did not think the first name would be changed. Judge Ballew ordered the 7-month-old’s name be “Martin DeShawn McCullough.” It includes both parents’ last names but leaves out Messiah.

“The word Messiah is a title and it’s a title that has only been earned by one person and that one person is Jesus Christ,” Judge Ballew said. [Source]

The judge arbitrarily renamed the child’s name from Messiah to Martin. Will parents now have to seek permission from the state to choose their babies’ names?

In an interview on WBIR Channel 10 News the judge says

I thought out into the future. … The word Messiah is a title. And it’s a title that only has been earned by one person. And that one person is Jesus Christ. … It (the name) could put him at odds with a lot of people. And at this point he has had no choice in what his name is.

When the reporter asked the judge for her thoughts for children named ‘Jesus’. In the Latino culture many name their children ‘Jesus’ pronounced in Spanish as ‘hey sues’. The judge had the following non-response.

I thought of that as well. And that’s not relevant to this case.

Americans must start paying attention. Those that are accusing others of infringing on their freedoms are projecting. It is they who are attempting to infringe on the freedom of the masses. The various anti-women bills that are being fought against in Texas and other states are probative. Law enforcement methods that infringe on women’s person are probative. The denial by Governor Rick Perry of Texans ability to get healthcare that their tax dollars are paying for already via the expansion of Medicaid afforded by the Affordable Care Act is probative.

American citizens will eventually understand that there is a concerted effort to use smoke and mirrors to slowly erode their freedom, independence, and worth. This is the only way the Plutocracy continues as the working middle class gets less and less. These erosions of freedom enslave the mind that allows the acceptance of one’s own demise.