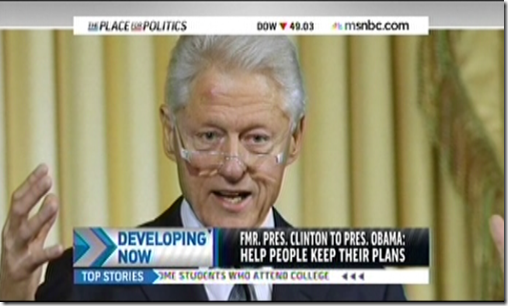 Bill Clinton knows better. He has been anointed Explainer In Chief by both the Traditional Media and President Obama. Sadly, he is not living up to his billing over the last few days.

The problem should be placed partly on President Obama. He gave MSNBC’s Chuck Todd an interview where he seemed to apologize for insurance policies that are being cancelled. These cancellations were due to insurance companies selling junk policies post Obamacare passage into law.

President Obama said he would attempt to modify the Affordable Care Act to minimize the disruptions caused by the 2% or so that are affected. The President does not support modifications that break the intent of the law. The intent of the law is to ensure all Americans with policies post Obamacare, get real insurance. According to the New York Times,

officials signaled the president’s strong opposition to calls from across the political spectrum — including one Tuesday from a key ally, former President Bill Clinton — to support bipartisan legislation that would allow people to keep their current insurance plans even after provisions of the Affordable Care Act go into effect next year.

White House officials refused to discuss in detail what options Mr. Obama was considering. But they made clear that the president was skeptical of any solution that would allow insurance companies to continue selling what officials consider to be cheap and substandard policies.

“Broadly speaking, we do not see that as fixing the problem,” Jay Carney, the White House press secretary, said Tuesday.

President Bill Clinton in his ultimate wisdom said the following in an interview published by Ozy, a web magazine.

“I personally believe even if it takes a change in the law, the president should honor the commitment the federal government made to those people and let them keep what they got,” Mr. Clinton said

To be clear, President Bill Clinton defended the law and also gave the flawed roll-out much perspective. That said, he is smart enough to know that the literal interpretation of the President’s statement would be harmful to Americans that keep bad policies in the long run. In fact it could bankrupt Americans who had to use those policies.

President Bill Clinton is a political animal and he is likely doing this for political expedience. One must remember he was the perfect architect of triangulation. In the process he allowed the Right Wing to move the country into policies detrimental to the middle class. Glass-Steagall fell under his administration. Continuation of supply side economics and outsourcing continued as well. That said, it is President Obama who got the first crack of near Universal healthcare effected into law.

Then again, President Bill Clinton may be on to something. Obamacare is a step closer to healthcare morality. Democrats should be fighting to support it even with problems from a position of strength. They should be fighting on moral and economic grounds. Yet, many Democrats are already starting to run for cover. Maybe this is short term cover for the spineless.

This should be stated over and over again. Until Democrats and Progressives get a spine and learn to engage irrespective of short term pain, Republicans will clean their clocks. Republicans have been wrong, deemed wrong by most, yet their resolve has been unwavering. This has allowed a left leaning country to effect Right Wing policies.