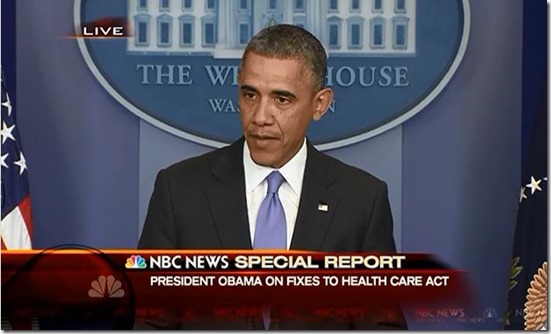 One must always be careful of what they ask for. Many have been accusing President Obama of breaking his promise ‘If you like it you can keep it’. The president ill-advisedly decided to ‘apologize’ in an interview with MSNBC’s Chuck Todd.

On Thursday the President gave an extensive news conference. Republicans may have been caught flat footed judging from the less than inflammatory rhetoric that followed. Maybe they thought the president would have to resort to legislation that they would be able to politicize and block.

The fix the president has instituted is rather ingenious. More importantly it immediately ensured that Congress, the insurance companies, and the American citizens absorb responsibility for the solution.

The president said, ‘Insurers can extend current plans that otherwise would be canceled into 2014 and Americans whose plans have been canceled can choose to re-enroll in the same kind of plan.” He then said, ‘This fix won’t solve every problem for every person, but it’s going to help a lot of people. Doing more would require work with Congress.’

President Clinton was the master of triangulation. Unfortunately while he seemed to win at triangulation, the poor and the middle class usually became its victim (e.g., Glass-Steagall, welfare reform, supply side economics). This move by President Obama if allowed to go through is how a masterful triangulation should be effected.

President Obama tells insurance companies they have the freedom to extend the policies but cannot force them. That removes the narrative of Obama/government takeover of your healthcare. He forces insurance transparency by requiring insurance companies to come clean on their substandard policies relative to the Affordable Care Act. In doing this the American citizens purchasing these policies know upfront that they are purchasing junk.

The fact that many will now have the comparison and the knowledge that there may be subsidies on the exchange will limit the size of that insurance market. This means it is unlikely many insurance companies will bite. There are some people who will not get subsidies, will not have policies extended by insurance companies, and will be upset that they will pay higher rates. The president put the onus of fixing that on working with Congress. Congress can choose to engage or not. Not engaging becomes a new campaign direction for Democrats.

Purist believe the Obamacare fix is about to create a big mess. This is partly true. This mess is politically necessary to expose insurance companies and Republicans. It will illustrate realities versus perceived hypotheticals.

The insurance companies attempted to circumvent the Obamacare exchanges and got bit. Their threats of future higher premiums should be ignored. If they do not work towards assisting in getting a sustainable pool that can be insured at affordable rates, Americans will demand a public option which will likely evolve into a single payer (Medicare for all) in the form detailed by Anthony Weiner on Real Time with Bill Maher.

The roll out of the healthcare.gov has been a mess. President Obama said that he is responsible for fumbling the rollout of Obamacare. He also said that when he became president he told Americans he would not be perfect but he would be working throughout his administration to make life better for Americans. He said the old individual insurance market was not working. Many only had insurance until they had to use it. He reiterated all the benefits of Obamacare.

The president’s news conference was contrite yet assertive. It was likely compelling to many in its detail. Near universal coverage has eluded every president in the 20th and 21st centuries thus far. Those who are betting that obstruction and sabotage would deter this president should take heed. This president has accomplished substantive changes to the direction of this country even as billions have been spent to derail him. Bet against him at your peril. The president will win this one. Americans will win.