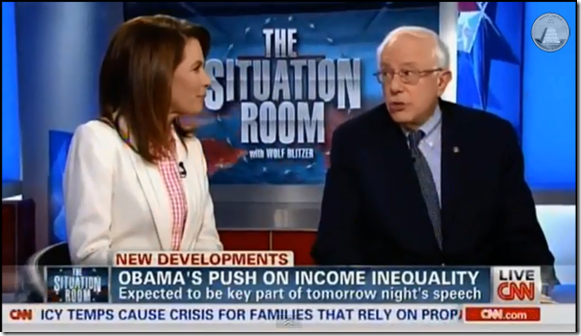 This was a very difficult debate to watch. It should however be instructive to those attempting to understand why America is so misinformed. It illustrates how misinformation is allowed to mask truth.

Before the exchange between the two politicians, the following Poppy Harlow story ran. Ann Valdez was living the multigenerational cycle of poverty. She did not think that the war on poverty was successful. No one in her condition would.

The question on the table for Rep. Michele Bachmann (R-MN) and Senator Bernie Sanders (D-VT) from CNN moderator Wolf Blitzer was simple. He asked what both of them would do about the issue of income inequality.

Frank Luntz would be proud of Michele Bachmann. She proved that she is master of the difficult art of effective obfuscation. Many view Michele Bachman as uninformed or less than bright. That is not the case at all. It takes a high degree of intelligence to take a story like Anne Valdez and make it a story solvable by the same ideology that is causal.

Michele Bach man concluded that Anne Valdez did not want welfare. She wanted a job. That is a true statement. However her implication was that the welfare itself was the cause of her economic state, her poverty. She then immediately segued into reframing the question. “It isn’t income inequality,” she said. “It is income opportunity. We need growth. We need prosperity. Because a job is what she wants? That’s the dignity that she needs and the opportunity for a way out.” That phrasing was perfect.

This exchange should be studied. It should be used to train politicians on how to avoid the failure to get their point across. It should also be used to teach them how effective an assault on truth is when clever phraseology is used.

Michele Bachmann says that growth is how we get people out of poverty. There has been growth in the American economy. The problem is that 95% of the income gains went to the top 1%. That is how income inequality is exacerbated and how poverty remains systemic.

Michele Bachmann continued the fallacy of lower taxes creating more jobs. Wolf Blitzer then corroborates the statement. Michele Bachmann even turned one of Bernie Sander’s best points in her favor with another truth sounding fallacy. Bernie Sanders stated the fact that Scandinavian countries like Norway and Denmark hold healthcare as right. They kept their poverty rate very low. She first called them socialists. When he expresses the positive state of their economy, she immediately morphed into their capitalist nature on energy. She accused current Obama policy as being anti-energy.

A few weeks ago I wrote a piece titled “Not A Winning Message: War On Poverty, Income Inequality, And Wealth Disparity.” Michele Bachmann proved exactly why that is the case. It is true that one can have all the numbers to prove the real causes of poverty, income inequality, and wealth disparity. Unfortunately for the average person it means little. They want a job. They want food on the table. They want their kids to have a college education. They want security. If the rich’s income and wealth growth rate is larger than the growth rate of the economy, it’s a transfer of wealth from the poor and the middle class to the rich. The problem is that concept resonates to just a few. It is hard to comprehend.

Michele Bachmann continued to keep Bernie Sanders off message by interrupting him and with ample help from the moderator Wolf Blitzer. In this debate truth took a beating.