Matthew Dawd made the most important statement on the minimum wage. 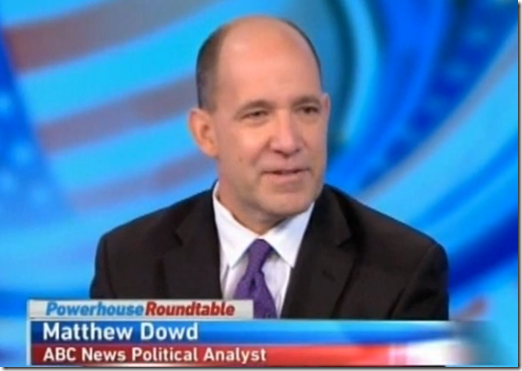 The roundtable discussion on ThisWeek was one of the best on the Sunday Morning news programs in a while. It was substantive and discussed the issue of a living wage from several points.

This is the continuous transfer of wealth from working America to the rich. This is what has been holding back the middle class for the last 30+ years. That a moderate like Matthew Dawd has so forcefully stated it, one would hope that going forward the issue will take center stage. It will have to be messaged in a manner consistent with the values of working America.

Bill Kristol conceded something one would never expect. He actually proposed taxing the wealthy and redistributing it to the poor in the form of credits. That was astounding but is also worth exploring.

Donna Brazille made a statement that should scare low wage workers. She said that waiter’s minimum wage is $2.13/hour. It is the same as it was early in her working years.

Last week Bob Herbert was on MSNBC where another substantive discussion on the minimum wage was held. He made an important point. “It seems to me that if you can’t afford to pay your workers a reasonable wage,” Bob Herbert said. “You can’t afford to be in business. How is a wage any different for example like your overhead, your rent, than what you have to pay for supplies, and that sort of thing? The idea that workers should subsidize the profits of corporations I think is just silly. Pay workers a reasonable wage.”

National discussions are finally placing the working poor and the failing middle class at the top of the agenda. One hopes it will remain there till America atones to those that have built this country on their backs.