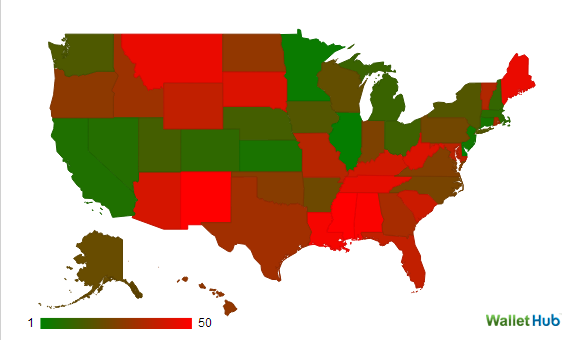 The map above is striking. It is a perfect illustration that politics and facts at times seem mutually exclusive. In short, with just a few exceptions, the states whose politicians preach small government are much more dependent on it than other states.

Some who need the most are brainwashed

John S Kiernan, a senior writer & editor at Evolution Finance wrote an excellent piece on state federal government dependency. He compiled data from the Internal Revenue Service, the Census Bureau, Transparency.gov, US Department of Commerce – Bureau of Economic Analysis and the Bureau of Labor Statistics. There is a striking political & economic statement in his article that should be digested.

The extent to which the average American’s tax burden would vary based on his state of residence represents a significant point of differentiation between state economies.  But it’s only once piece of the puzzle.

What if, for example, a particular state can afford not to tax its residents at high rates because it’s receiving disproportionately more funding from the federal government than states with apparently oppressive tax codes?  That would change the narrative significantly, revealing federal dependence where bold, efficient stewardship was once thought to preside.

The conclusion of the report is something many have written about over the last several years; Red States by far are more dependent on the federal government and are poorer. In the aggregate these states take back much more from the federal government than they put in. More of their gross domestic product is also more dependent on direct and indirect government outlays. This turns the takers vs makers debate on its head as those pushing that message represent the end they portend to despise.

Do they really want a small federal government? It would kill their states’ economies.

Many of the southern states that have no state income tax or have low taxes do so on the backs of the states that pay much more in federal taxes. Governors like Texas Rick Perry make the rounds attempting to bring business to their states. They do it under the pretext of these states having better business environments because of low taxes and regulations. They should note they can have low taxes because they are subsidized by the federal government and the poor.

9 out of these 11 states are Red states. Sadly these states are also the poorest states. Empirically should results not dictate whether policies should be deemed successful? In that regards it is evident the policies of these states are not helping their citizens. It does them material harm.

Articles like this are very important. Most Americans get their perspective from 10 second, 15 second, and 30 second sound bites. Data like this helps remove the blinders and rose colored glasses.