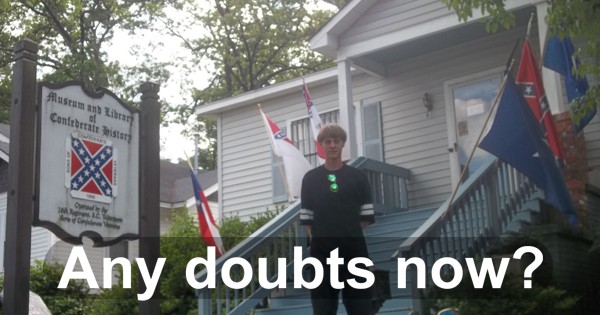 A website has been tied to Dylann Roof. A reverse DNS  lookup by @HenryKrinkle and @EMQuangel found that a Dylann Roof registered lastrodesian.com. It has one document and a zip file filled with pictures of this guy.

The quiet boy everyone has been trying to understand had deep roots into a racist conversion. It shows the effect that misinformation on the internet and misinformation from Right Wing media can have. It is a cancer.

The writing attributed to him as well as a few select pictures from the zip file are interspaced in the supposed manifesto. There should be no doubt the Emanuel AME Massacre is a hate crime by a terrorist.

Here is the writing unchanged typos and all from the site lastrhodesian.com.

I was not raised in a racist home or environment. Living in the South, almost every White person has a small amount of racial awareness, simply beause of the numbers of negroes in this part of the country. But it is a superficial awareness. Growing up, in school, the White and black kids would make racial jokes toward each other, but all they were were jokes. Me and White friends would sometimes would watch things that would make us think that “blacks were the real racists” and other elementary thoughts like this, but there was no real understanding behind it.

The event that truly awakened me was the Trayvon Martin case. I kept hearing and seeing his name, and eventually I decided to look him up. I read the Wikipedia article and right away I was unable to understand what the big deal was. It was obvious that Zimmerman was in the right. But more importantly this prompted me to type in the words “black on White crime” into Google, and I have never been the same since that day. The first website I came to was the Council of Conservative Citizens. There were pages upon pages of these brutal black on White murders. I was in disbelief. At this moment I realized that something was very wrong. How could the news be blowing up the Trayvon Martin case while hundreds of these black on White murders got ignored?

From this point I researched deeper and found out what was happening in Europe. I saw that the same things were happening in England and France, and in all the other Western European countries. Again I found myself in disbelief. As an American we are taught to accept living in the melting pot, and black and other minorities have just as much right to be here as we do, since we are all immigrants. But Europe is the homeland of White people, and in many ways the situation is even worse there. From here I found out about the Jewish problem and other issues facing our race, and I can say today that I am completely racially aware.