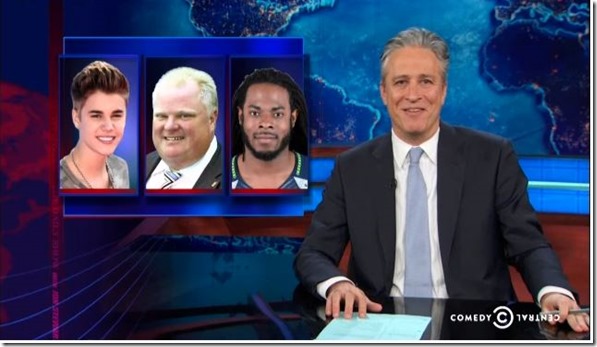 Jon Stewart has been making an important point over the last two weeks. The point applies to many unrelated issues but have a material effect on people’s lives directly and indirectly.

Last week he ridiculed MSNBC for a cut away from a substantive NSA Interview with a national security expert to Justin Bieber’s arrest in Florida. A few weeks before he knocked Fox News on its unscientific coverage of climate change.

Jon Stewart does it again. Toronto’s crack Mayor Rob Ford sends a violent message to a local prisoner. He also admits to smoking crack. He is videoed drunk and acting uncontrollably. Justin Bieber is accused of a felony in California for egging a neighbor’s home causing thousands of dollars in damage. He is arrested and charged in Florida for driving under the influence. Justin Bieber is also charged with assaulting a limo driver in Canada.

Richard Sherman excelled in high school. He had a 4.5 GPA and a 1200 SAT score. He is a Stanford graduate. He has never been arrested.

Richard Sherman gives back to his community with his The Sherman Family Foundation. The stated mission of the foundation is “to level the playing field for children enrolled in grades K-12 who have a strong combination of potential, goals and a desire to make the most of their education.”

Richard Sherman attempted to congratulate Michael Crabtree. Instead, Michael Crabtree rebuffed him with an arm to his shoulder and facemask. After an exciting and emotional game he had a loud outburst. With all the excitement he did not once utter an obscenity.

Yet throughout the media Richard Sherman was labeled a thug. Later on he made a prescient statement. Thug is now the politically correct way to call someone the N-word.

Justin Beiber and Rob Ford were labeled bad boys. In fact one of the reporters said they kind of liked Rob Ford. Jon Stewart lays it out well below.

The media in the case of Richard Sherman, Justin Beiber, and Rob Ford is not playing into American’s racial fears. It is defining what their fears should be.

This does not only apply to racial issues. It applies to political issues that have material impacts on all American lives.  Chuck Todd and other ‘journalists’ frequently gave Right Wing conservatives a pass that allowed them to use America’s airwaves to lie and misinform about Obamacare, the IRS, and many other issues. This did not help the debate or help Americans. It defined a narrative. It defined a false narrative.