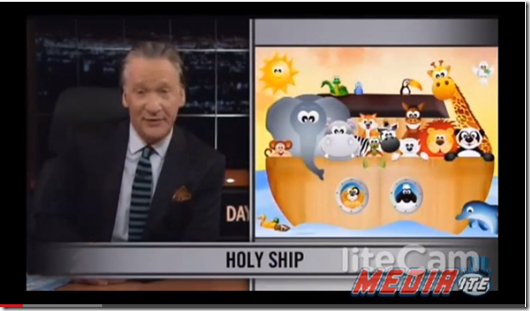 I watched Real Time with Bill Maher last night. As usual I found it very entertaining. He had an intelligent cadre of guests. Appearing were author of The Satanic Verses: A Novel Salmon Rushdie, author of Countdown: Our Last, Best Hope for a Future on Earth? Alan Weisman, Seth MacFarlane, author of The Triple Package: How Three Unlikely Traits Explain the Rise and Fall of Cultural Groups in America tiger mom Amy Chua, and conservative blogger Andrew Sullivan.

It was an intelligent show. He covered overpopulation with Alan Weisman. His panel discussed the Ukraine crisis. Andrew Sullivan more than anyone on the panel understands the crisis. He seemed to paraphrase Robert Parry’s analysis in some areas.  They talked about the neocons. The change in the SAT test inflamed a few. Seth MacFarlane spoke about the rebirth of Cosmos.

Bill Maher closed out the show with a pretty rough New Rules. This New Rules was likely his harshest attack on religion in this venue. To be clear, all his points were valid to those of us that not only love science but that read the bible or any other religious book literally. The points are valid for those of us that see the inconsistencies of the religious. The points are valid for those of us who see Christians, Muslims, and others maim or kill in the name of their God or religion.

That said, there are many good people who are culturally attached to their religion and they have no desire to analyze it with scientific precision. These are good people working within their churches helping people throughout their communities and the world.  These are people doing much more than many who absolutely believe that religion is crap.

As a Humanist I believe much of what Bill Maher believes sans a supreme being or supreme force that I use to ease my mind when I try to figure out what came before the beginning. Bill Maher would do well to freely articulate his disbelieve while leaving the religious their space to worship whatever they want to worship.