Number of Liberals ascending as number of Conservatives fall 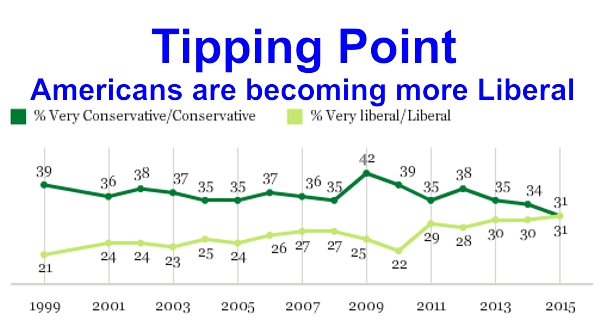 Thirty-one percent of Americans describe their views on social issues as generally liberal, matching the percentage who identify as social conservatives for the first time in Gallup records dating back to 1999.

Gallup first asked Americans to describe their views on social issues in 1999, and has repeated the question at least annually since 2001. The broad trend has been toward a shrinking conservative advantage, although that was temporarily interrupted during the first two years of Barack Obama’s presidency. Since then, the conservative advantage continued to diminish until it was wiped out this year.

When one asks people their wants, desires, and their social beliefs independently, it is always evident that Americans in general are very Liberal. What the Right had been successful in doing using methodologies inspired by the Powell memo, is to vilify the word ‘Liberal’ and all that it means. It is not surprising that Americans are self-describing as Liberals now.

Why? The misbehavior, disregard for fellow Americans, and boldface hypocrisy of many prominent Conservatives have removed the fear of many to identify as they really are and really feel.

There is still a caveat. Even though the gap has closed substantially, more still self-describe as Conservative on economic issues. The redefinition of Conservative as more economically responsible is still dominant. This is the case even as the destruction of the middle-class through trickle-down economics, the explosion of the deficits, and income & wealth disparity being a result of provable irresponsible Conservative policies. What policies? Fighting wars without raising taxes to pay for it. De-funding education in order to lower taxes. Lack of investment in infrastructure which will cost more in the long run. Lack of spending on social issues to empower the lower classes responsibly.

As the country overtly liberalizes it throws the plutocracy’s back against the wall. It is for this reason that many anti-democratic policies are being placed into effect. The Supreme Court’s Citizens United and McCutcheon decisions is an attempt to allow the wealthy plutocrats the ability to use their fortune to flood the body politic with misinformation. The Supreme Court’s gutting of the Voting Rights Act is an attempt to give the plutocrats the wherewithal to prevent many from voting or simply stealing the vote.

Americans must be cognizant that as the citizens of the country are enlightened, as they start thinking for themselves to define the America they really want, there will be anti-democratic forces infiltrating the debate sometimes in sheep clothing, sometimes injecting false fear, and sometimes simply terrorizing the population at large. One must be mentally prepared and resolute.

The following Move To Amend documentary is very informative. It illustrates that from the inception of America, there has always been a struggle between democracy and plutocracy. As liberalization occurred to fight the laws of the plutocracy and the democracy moved forward, the anti-democratic nature of the judiciary was used as an instrument to curtail it.

This week Move to Amend Reports’ radio show invited Thom Hartman to discuss much of this as well. He is a strong proponent of the we the people amendment.

Americans are waking up. It is imperative that we do not stay in the waking up daze if we intend to prevent the plutocracy from successfully putting us back to sleep.